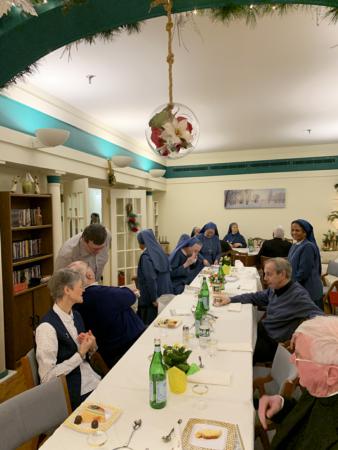 Cardinal O'Malley visited the Sister Disciples of the Divine Master at their house on West Street for a dinner they organize every year for the sisters and several priests. Pilot photo/CardinalSeansBlog.org

On Friday, I went to Regina Cleri to visit Father John Doyle, whose health was failing. His niece was there with us and we had an opportunity to pray together. Sadly, just a couple of days later, on Sunday, he passed away.

Father Doyle will long be remembered for his tireless commitment to working for the poor and marginalized. Beginning in the early 1960s, he spent 24 years ministering to the poor of Bolivia with the St. James Society. There, he was known for going wherever the people most in need were -- whether that was in the remote villages or in the city slums. When he returned to Boston in the late 1980s, he brought with him that same spirit of service, working to promote social justice, particularly for the poor and immigrant communities, first in Brockton and later in Dorchester. Even in his retirement, he continued to help the immigrant communities of St. Gabriel’s in Brighton and then Most Holy Redeemer in East Boston by celebrating the Spanish Mass for them and hearing confessions.

He certainly had a great impact on so many people, and his death is a great loss for the archdiocese.

My visit to Regina Cleri gave me an opportunity to see some of the latest renovations in the common area.

Of course, regular readers will remember that a few months ago we celebrated the completion of the beautifully renovated chapel. They continue to add more rooms and to update the facility. These renovations have been such a great blessing for our retired priests and we are happy that we are able to continue making improvements to Regina Cleri.

On Saturday, I went to Immaculate Conception Parish in Marlborough to bless the renovations to their church.

Almost exactly a year ago, there was a very serious fire in the sacristy that destroyed the sacristy and led to a great deal of smoke and water damage in the church. As a result, the upper church was closed for nearly a year.

They were able to complete the repairs in time for the Christmas Masses, and I was happy to come just a couple weeks later to rededicate the church.

The renovations came out very well, and the church looks beautiful.

It was also a very fitting occasion to install the parish’s new pastor, Father Steven Clemence.

We were very happy that his parents and his brother, William, who is also a priest, were able to be with us along with several of Father Steven’s classmates and neighboring pastors.

Immaculate Conception is a very diverse parish, so the Mass was trilingual in English, Portuguese, and Spanish. It was very encouraging to see, on a Saturday afternoon, a church that was filled with many young people, families, and children from the parish school.

At the end of the Mass, they presented me with two very nice gifts -- a picture of the school’s crest signed by all the students and a beautiful painting of my coat of arms prepared by one of the families of the parish.

Afterwards, there was a reception in the school, and I was very pleased to be able to greet the people.

Sister Disciples of the Divine Master

Each year, the Sister Disciples of the Divine Master organize a dinner for the sisters and several priests at their house on West Street in Boston.

We began with Vespers, and afterwards, the sisters served a lovely dinner. After dinner, as he does each year, Father Paul Rouse played the piano and led us all in singing Christmas carols.

The Sister Disciples are such an important presence in the archdiocese -- both at the Pastoral Center and Regina Cleri, as well as their house on West Street. The ministry of providing wonderful liturgical vestments, the special care they give our retired priests, the ministry of presence that they practice, as well as their special commitment to Eucharistic adoration are a great blessing for our archdiocese.