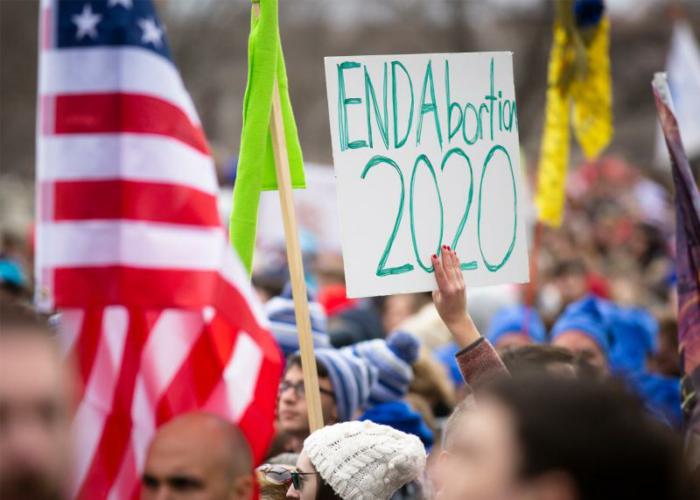 A pro-life sign is displayed during the annual March for Life rally in Washington Jan. 24, 2020. Charles Camosy, an associate professor of theological and social ethics at Jesuit-run Fordham University and former board member of Democrats For Life, said Feb. 6 the Democratic Party's support for abortion at any stage has driven him away from the party. (CNS photo/Tyler Orsburn)

NEW YORK (CNS) -- A prominent associate professor of theological and social ethics at Jesuit-run Fordham University and, until recently, a longtime board member of Democrats For Life said Feb. 6 the Democratic Party's support for abortion at any stage has driven him away from the party.
"For someone who is progressive on most issues, this decision doesn't come easy," Charles Camosy wrote in a commentary in the New York Post daily newspaper.
"Like most Democrats, I believe government has an energetic role to play to support women, families and children. I support paid family leave, help with unaffordable child care, labor union rights, the Affordable Care Act, child and adoption tax credits, and much else of the kind," he said.
"I'm worried about climate change. I'm an outspoken vegetarian. I believe in welcoming refugees and immigrants. I oppose needless wars," he continued. "But the party gave me no choice."
But Camosy also said: "My broader values mean I can't vote Republican, however, and this makes me one of many millions of Americans for whom our political duopoly doesn't work."
He has joined the American Solidarity Party, which he described as "a small but growing group that refuses to compromise on support for women, protection for prenatal children, and solidarity for working people and the poor and vulnerable."

Camosy said the "straw that broke this camel's back" was Democratic presidential candidate Pete Buttigieg's "extremism." This "mainstream Democratic candidate" suggested "at one point, that abortion is OK up to the point the baby draws her first breath," he said.
Buttigieg made headlines at Jan. 26 Fox News town hall when he was asked by Kristen Day, executive director of Democrats For Life: "Do you want the support of pro-life Democrats -- pro-life Democratic voters?"
"I am pro-choice," he responded. "And I believe that a woman ought to be able to make that decision."
He said he understood if pro-life Democratic voters would not support him for his stance. "The best I can offer is that if we can't agree on where to draw the line, the next best thing we can do is agree on who should draw the line," he said. "And in my view, it's the woman who's faced with that decision in her own life."
During a Fox News town hall May 19, 2019, when asked if he supports late-term abortion, Buttigieg similarly said he believes there should be no limit on abortion and that those obtaining abortions must decide when it's acceptable.
In his New York Post commentary, Camosy said that Democrats For Life is "a small group, but as many as a third of Democrats identify as pro-life."
"Even when party leadership finally met with us (the pro-life organization), they didn't take us seriously," said the ethicist, who also is the author of a new book titled "Resisting Throwaway Culture."
"When we showed them that pro-life Democrats would beat Republicans in certain districts, it didn't matter," he said. "Even when we called for more reproductive choices for women with difficult pregnancies through services like perinatal hospice care, party leaders ignored us.
"Anything even hinting that abortion is less than good now violates party orthodoxy."
"If the party was willing to go all-in on the most volatile issue of our time with a position held by only 13% of the population," Camosy continued, "it was time to take no for an answer."
He said many "find it difficult to understand how a single issue could be so motivating for so many millions of people," for he offered a "thought experiment" to help those who don't understand this.
"Suppose that hundreds of thousands of children are being killed each year in horrific ways. Often they are killed because they have Down syndrome," he explained. "Sometimes, it is because their grandparents thought their parents were too young and irresponsible to have a child. Very often, it is because an abusive partner demands that the child be killed on threat of violence.
"And then suppose a political party claimed this killing was a social good. Just another kind of health care."
It should "go without saying" this party would be unsupportable," he said.