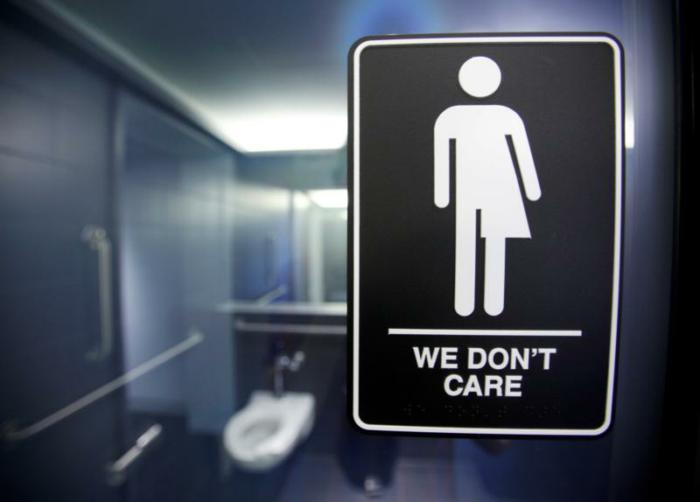 A sign indicating a unisex bathroom is seen in 2016 in North Carolina. (CNS photo/Jonathan Drake, Reuters)

GENEVA (CNS) -- A United Nations report addressing gender-based violence and discrimination connected to religious beliefs "is now attacking the very reality it is called to defend," a Vatican representative told a U.N. meeting in Geneva.

"The report, at least in part, is actually an attack on freedom of religion or belief as well as freedom of conscience," said Archbishop Ivan Jurkovic, the Vatican observer to U.N. agencies in Geneva.

Archbishop Jurkovich made his remarks March 2 during a session of the Human Rights Council that was discussing a 2020 report by the U.N.'s Special Rapporteur on Freedom of Religion or Belief. The Vatican mission released a copy of the speech March 3.

Archbishop Jurkovich said the Vatican delegation was greatly concerned with the report.

"Particularly unacceptable and offensive are the numerous references that recommend that freedom of religion or belief and conscientious objection must be surrendered for the promotion of other so-called 'human rights,' which certainly do not enjoy consensus, thus being a sort of 'ideological colonization' on the part of some states and international institutions."

The Vatican, he said, defines "gender" and related terms "according to the ordinary, generally accepted usage of the word 'gender,' based on the biological identity that is male and female."

"My delegation cannot but lament that the report seems to focus less on the protection of men and women, of any faith or personal belief, that are persecuted or discriminated against -- a still too vivid reality for millions of persons worldwide -- and more on pushing a vision of human society that is not shared by all and does not reflect the social, cultural and religious reality of many peoples," he said.

Pope Francis and the Vatican, he said, have noted the "growing influence within the international organizations of powers and interest groups that impose their own visions and ideas, sparking new forms of ideological colonization, often in disregard for the identity, dignity and sensitivities of peoples."

"It is rather unfortunate, yet increasingly less surprising given its frequency, that a U.N. report, which should defend the fundamental and universal human right of freedom of religion or belief as well as the right to conscientious objection, is now attacking the very reality it is called to defend," he said.

The U.N. report looked at examples around the world of how some claims of religious freedom were being used to rollback or make exemptions to laws against gender-based violence and discrimination, and the report called for greater efforts by states to promote both freedom of religion and non-discrimination against women, girls and those identifying as lesbian, gay, bisexual or transgender.

The report criticized "religious interest groups" and individuals who invoke "religious tenets as well as pseudoscience" to defend traditional values about social roles for men and women, and who oppose "gender ideology" in ways that intimidate or stigmatize critics.

The report noted ongoing gender-based discrimination that is defended or perpetrated in the name of religion or belief, such as with forced genital mutilation, forced virginity tests, marital rape, child and forced marriage, polygamy, forced sterilization and abortion, domestic violence, "honor killings," the criminalization of adultery, particularly ending in death by stoning, compulsory restrictive garments or veils and banning access to religious temples or one's own home for women during their menstrual period.

The report, however, also expressed concern with states banning or limiting access to abortion, contraception and artificially assisted reproduction -- policies the Catholic Church speaks out against in promoting the sanctity of life.

The report supported conscientious objection by individual healthcare or medical providers, but expressed concern with private persons terminating employment or denying services, such as housing or insurance coverage, to women and LGBT persons due to religious objections.

The special rapporteur said, "The right to freedom of religion or belief belongs to individuals, not religions," and states should not interfere with a religious community's practices or internal organization. States are prohibited from imposing beliefs on individuals and communities, however, "religious actors can and should, in upholding their institutional autonomy, be exempted from complying with government regulations where doing so would not inordinately discriminate against others on the basis of gender."