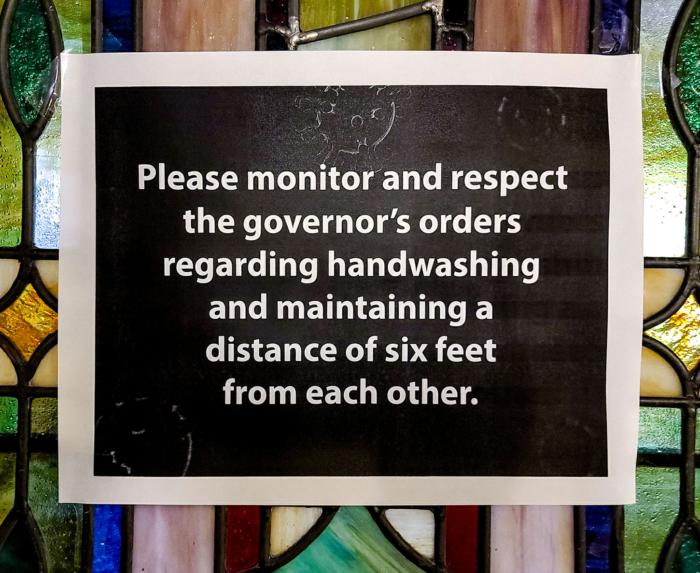 A sign posted on the door of Bethany Chapel in the archdiocese's Pastoral Center March 18 urges visitors to follow hygiene and social distancing guidelines. While public worship is suspended, Cardinal O'Malley has asked churches to remain open for prayer and adoration. Pilot photo/Gregory L. Tracy

Dr. Thomas Heyne: Suspending Masses was an act of charity

Cardinal urges praying the rosary in absence of Masses

(This story was updated March 20 to reflect the latest directives from the Archdiocese of Boston.)

BRAINTREE -- In response to concerns of the public and government officials, Cardinal Sean P. O'Malley has suspended all public Masses and religious services in the Archdiocese of Boston until further notice. The archdiocese has also ordered all Catholic schools to close and suspended all religious formation programs.

The suspension of public Masses and religious services was effective March 14 and the cardinal issued a dispensation from the obligation to attend Mass during this time to the Catholics of the Archdiocese of Boston.

In a message to parishes sent March 13, Cardinal O'Malley asked that all parishes provide for their churches be open "every day during reasonable hours in order that the Catholic faithful and other members of the community can have the opportunity to visit the church for times of prayer."

The cardinal has also asked that, when possible, there be exposition of the Blessed Sacrament in the churches.

"When we visit our churches outside of Mass and see the red glow of the sanctuary lamp we know that Jesus is there with us," the cardinal said.

"The presence of the Eucharist in the tabernacle and during times of Adoration is a sign that Jesus silently and lovingly waits for us, always ready to receive and console us. May our prayers in the presence of the Blessed Sacrament be a source of strength and peace until we can safely resume the celebration of Mass for all members of the Catholic community in our Archdiocese and all who would wish to join us at that time."

Baptisms and weddings may proceed but attendance should be limited to only immediate family and must not exceed 25 people.

Funeral Masses were also originally allowed to continue, subject to similar conditions on attendance. However, on March 19, the archdiocese notified priests that, because of the difficulty in limiting attendance at funerals, effective March 23 funeral Masses and services were also suspended.

“We recommend that the bereaved be offered the opportunity for a graveside committal service during this time and a Memorial Mass when we are able to again offer the celebration of Mass and religious services at our parishes and churches,” the archdiocese said in its directive to priests.

"We live in times when many people are confused, hurt, and fearful, for many different reasons. In the midst of these challenges Jesus seeks to meet us in the same way He met the disciples on the road to Emmaus, accompanying us on the journey, calming our fears and anxieties and assuring us that He will be with us always in the gift of the Eucharist," Cardinal O'Malley said.

"This decision to temporarily suspend the daily and Sunday Mass is motivated by an abundance of caution and concern for those most vulnerable and the need to do our part to help limit and mitigate the spread of the illness," the cardinal added.

He encouraged the faithful to participate in the daily and Sunday Masses broadcast through CatholicTV, which is available through local cable providers as well as through several streaming platforms, such Roku, Apple TV, Amazon Fire TV, Samsung Smart TV, and through iOS and Android mobile apps.

Viewers can also view Masses on demand at any time at www.WatchtheMass.com. More information about how to view CatholicTV is available at CatholicTV.org.

In response to the Mass suspensions, several local parishes and shrines have also begun online streaming of Masses and adoration through Facebook, YouTube, and other social media.

"Though these are challenging times for our parishes and all members of our communities, it is important that we not forget the importance of care and concern for those who are most vulnerable, including the poor, our senior citizens, and people who are medically compromised. I urge those who can do so to maintain the support for their parish during these difficult days in order to sustain the ministries and outreach services for parishioners and those most in need. We entrust the Church to the intercession of our Blessed Mother as we pray for the return to full celebration of the sacraments and community prayer as soon as possible," said Cardinal O'Malley.

As of March 18, the archdiocese's Pastoral Center is currently slated to remain open. However, on-site staff is being limited to those with essential job functions, with all other staff being directed to work from home and with no outside visitors or meetings permitted.

Carroll urged Catholic schools to continue providing meals to students eligible for free or reduced-priced lunch during the closure in a way that would not require students to enter school buildings.

In light of the superintendent's decision, Michael Lavigne, assistant cabinet secretary for evangelization and discipleship, also notified parishes March 13 that all faith formation and related activities are suspended until further notice.

Confirmations scheduled to take place in the Archdiocese of Boston prior to Easter, April 12, are postponed.

On March 12, the archdiocese said activities related to the Catholic Appeal, originally scheduled for the weekend of March 14-15, have been postponed until the weekend of May 2-3 or another weekend. Contributions can be made online at www.bostoncatholicappeal.org.

In his remarks before celebrating a televised St. Patrick Day Mass on March 17, Cardinal O'Malley urged the faithful to turn to the rosary during this time of suspension of public Masses and services.

"Many of us remember growing up praying the rosary every evening as a family. In the history of our people, during the wars, famines, plagues, and persecution, the rosary has been the powerful prayer of the Catholic people," the cardinal said.

"Even if we cannot go to Mass, the rosary is always accessible to us. It is a prayer that puts us in touch with God as we reflect on the mysteries of the life of Christ and the Blessed Virgin. It is a prayer that can be prayed by the simplest peasant and the most brilliant scientist," he said.