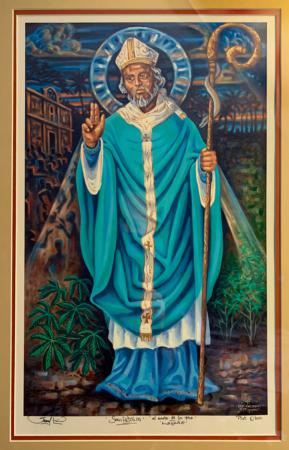 A painting hanging in Cardinal O'Malley's office depicts St. Patrick as a black bishop. The cardinal included a photo of the painting in his March 13 blog post reflecting on St. Patrick's experience of slavery and calling for reparations for the descendants of enslaved Africans in the form of educational scholarships. Pilot photo/courtesy CardinalSeansBlog.org

BRAINTREE -- In his March 13 entry on his weekly blog, Cardinal Seán P. O'Malley proposed a way to make reparations to the descendants of slaves: by providing educational opportunities or assistance.

The proposal was posted on his blog, CardinalSeansBlog.org, just days before the March 17 feast commemorating St. Patrick, who was once kidnapped and sold into slavery, as Cardinal O'Malley reminded his readers.

He said St. Patrick followed "the same trajectory of so many African men and women who were abducted from their homeland and brought to America, where they were sold into bondage."

He mentioned that Thomas Cahill, author of "How the Irish Saved Civilization," calls St. Patrick "the first important historical figure to oppose slavery, the first abolitionist."

Cardinal O'Malley recalled his own experiences as a seminarian during the civil rights movement. He and other religious helped with voter registration, trained in nonviolent resistance, and participated in demonstrations, prayer services and town meetings.

When he served as bishop of the U.S. Virgin Islands, he said, he was "surrounded by many symbols of the chattel slavery that was part of the history of the islands for centuries."

He acknowledged that even after slavery was abolished in 1865, injustice against blacks continued in the form of lynchings and prohibitions against education. To this day, he said, the "cruel legacy" of slavery still affects the descendants of slaves.

Cardinal O'Malley pointed to the Department of Education statistics that indicate the positive impact that education has on African-Americans.

"Life expectancy among blacks is lower in the United States, except for those who are college graduates. Education is a crucial factor in elevating the standard of living of the African-American population," Cardinal O'Malley said.

He compared different government programs in history that directed resources to people experiencing economic distress. In the United States, after the Civil War, newly freed slaves were supposed to receive "forty acres and a mule" as reparations, but this plan did not come to fruition.

"Unfortunately, even that modest plan never materialized. If it had been carried out, the history of our country might have been much different. Black citizens would have been able to accrue and pass on wealth from one generation to the next, and the huge gap between black and white could have been avoided," Cardinal O'Malley said.

He went on to propose that reparations to the descendants of slaves should be made in the form of opportunities to further their education.

"It is my conviction that the indemnifications might be in the form of scholarships for primary, secondary, and university education for low-income families who are the descendants of the men and women who were unjustly held in bondage and exploited in our country," Cardinal O'Malley said.

He said that Americans "must unite in our opposition to the consequences that this immoral practice has visited on our nation."

The cardinal pointed out that many Bostonians of Irish heritage are descended from immigrants who fled Ireland during the Great Hunger.

"We are also the spiritual sons and daughters of Patrick, the escaped slave who raised a prophetic voice against this cruel and inhumane institution of human bondage. As your bishop, my appeal to you all is to repudiate not only slavery but also the consequences of slavery that weigh so heavily on the descendants of the African slaves who, like Patrick, were kidnapped and taken to a strange land and forced to perform hard labor for oppressive masters," Cardinal O'Malley said.

He expressed hope that this "attempt at restorative justice" could "change the face of America."

"Let us listen to the voice of Patrick calling us to end slavery and its legacy in our midst," Cardinal O'Malley said.