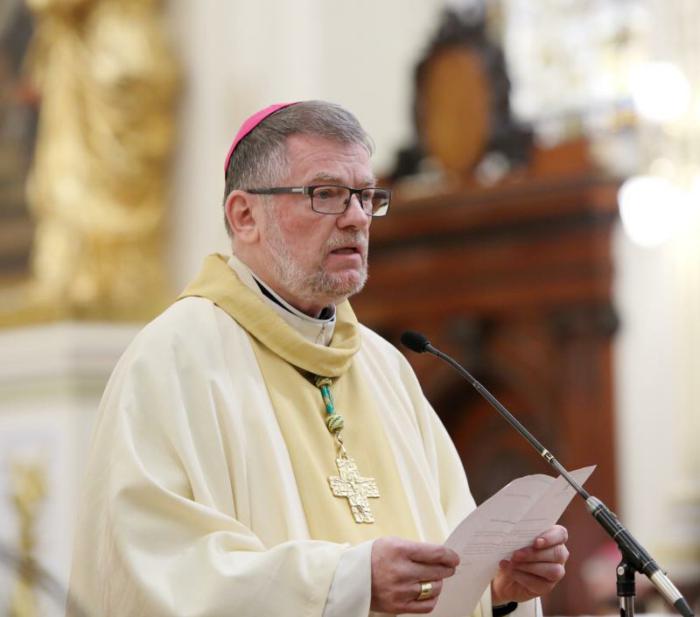 Auxiliary Bishop Marc Pelchat of Quebec is pictured in a 2018 file photo. He announced March 24, 2020, that the Archdiocese of Quebec is temporarily laying off most of its diocesan staff, as the government measures against COVID-19 are getting stricter. (CNS photo/Philippe Vaillancourt, Presence)

QUEBEC CITY (CNS) -- As the Quebec government tightens measures to prevent the spread of COVID-19 and allows only essential services, the Catholic dioceses of the province have started temporary layoffs affecting hundreds of Catholic employees and priests.

The Quebec government has ordered the closure of all nonessential businesses through April 13. Churches and other institutions of a religious or spiritual nature are not on the government's list of essential services.

The Diocese of Saint-Hyacinthe announced March 23 that it is laying off all staff at its diocesan center. It recommended parishes do the same.

"Unless there is a real need, I recommend to the parishes of the diocese to temporarily lay off, as of Friday, March 27, all personnel, including priests, so that they can benefit from employment insurance," said Bishop Christian Rodembourg. He called the provisions "heartbreaking."

"I do so, however, in the hope that they will help us get back on track as soon as possible," he added.

Bishop Rodembourg left it to the parishes to evaluate their needs and financial capacities.

The dioceses of Rimouski, Gaspe and Sainte-Anne-de-la-Pocatiere have made similar moves.

However, some dioceses are opting for partial layoffs. For instance, the Archdiocese of Sherbrooke is keeping its communications director.

"We want to maintain the link with the citizens, to keep them informed," explained communications director Eliane Thibault. "We want to keep this relationship with the population even if the churches are closed."

Some parishes in the Archdiocese of Sherbrooke have chosen to lay off their staff, but this movement was not widespread immediately.

"Some parishes prefer to lay off staff in the hope of getting back on their feet when the crisis is over," Thibault said.

The Diocese of Nicolet wanted to postpone the possibility of layoffs as long as possible.

"Assessments of personnel needs, even for telework, have not been completed but are in the process of being completed. The one thing that has been certain since the beginning of the crisis is that we haven't been operating with 'one-size-fits-all' measures, and that is the dynamic we would like to see continue with regard to the possible layoff of personnel," said communications director Jacinthe Lafrance.

The Archdiocese of Quebec City announced March 24 it was closing all nonessential services, resulting the layoff "of most of the staff," approximately 70 people, Auxiliary Bishop Marc Pelchat confirmed.

"An important part of the annual diocesan budget comes from parish contributions, which are currently under pressure. We must set an example as an organization that serves the communities, and that also makes the sacrifices required by a new situation," Bishop Pelchat wrote to employees.

He also said the archdiocese is doing this to "preserve our budgetary capacity to bounce back when the crisis ends and we want to collectively relaunch our activities that are currently reduced to a minimum." In the meantime, parishes are urged to maintain minimal services.

However, the Diocese of Saint-Jean-Longueuil has decided to do the opposite. In times of crisis, the diocesan church must "remain prophetic," Bishop Claude Hamelin said. The diocese must not lay off its staff, but rather commit them to "what we know how to do best," he said, "putting ourselves at the service of one another."

"When the crisis is over, what will we say about our diocesan church? Do we want to be remembered as those who only know how to close churches or lay off mothers and fathers?" asked Bishop Hamelin.

Thus, "for the next few months," the diocese has committed to give to the parishes donations equivalent to the salaries of their pastoral staff in service. He also asked the administrators of the local parishes to make the effort to review their priorities in order to give priority to services to the population.

Bishop Hamelin said that these measures will "weaken diocesan financial resources," calling it a "risky but necessary action." He is convinced that this "daring" decision is the only possible one, because it's "in solidarity and rooted in the hope that comes to us from the Lord."

Contributing to this story was Francois Gloutnay in Montreal.