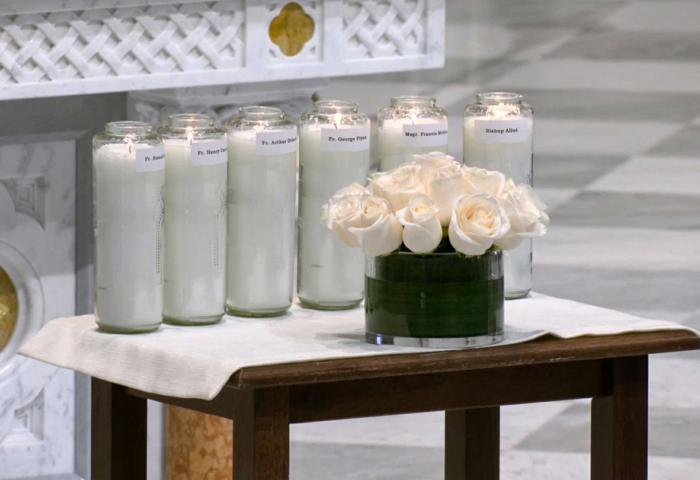 Candles labeled with the names of the six priests who have died in recent weeks sit in front of the altar of the Cathedral of the Holy Cross during a memorial Mass celebrated by Cardinal O'Malley May 1. Pilot photo/courtesy The CatholicTV Network

BOSTON -- Priests who have died since the suspension of funeral Masses in March were remembered at a televised memorial Mass celebrated by Cardinal Seán P. O'Malley at the Cathedral of the Holy Cross May 1.

Public Masses have been suspended in the archdiocese since March 14 to prevent the spread of the COVID-19 virus. Families and communities have been unable to have wakes, funeral Masses and memorial Masses, though graveside services are allowed as long as social distancing is observed.

In a May 1 entry of his weekly blog, Cardinal Seán O'Malley said the memorial Mass was held, "particularly in light of the fact that the priests from Regina Cleri, because they are in isolation, were not even able to attend a graveside service. Usually, they have services at Regina Cleri for priests who die in the residence."

The only people present to celebrate the Mass were Cardinal O'Malley; Bishop Robert Reed, the president of CatholicTV; and Msgr. Kevin O'Leary, the rector of the cathedral. Six candles with the names of the deceased clergy burned in front of the altar throughout the service.

In his remarks at the beginning of the Mass, Cardinal O'Malley explained that the event was "not meant to replace" the memorial Masses that will be celebrated for each priest when their communities are once again allowed to gather publicly.

However, he said, "since there were so many priests that died in such a short period of time, we thought that it would be good to have this Mass as a way to mark their passing, and to thank God for their vocations and to pray for their eternal rest."

He said a few words about each of the deceased clergy.

Father Russell Best was a graduate of the Cathedral of the Holy Cross grade school and high school. He served twice in Latin America through the Society of St. James.

Msgr. Francis McGann was a priest for just over 70 years. Cardinal O'Malley noted the irony in the fact that Msgr. McGann was "faithful" about attending the funerals of priests, yet died at a time when priests could not do the same for him.

Father Henry Cunney was a priest for 61 years, 49 of which were spent in active ministry across all five regions of the archdiocese. He was assigned to numerous parishes over the course of his priesthood, and also served as campus minister or chaplain of three different schools.

Father George Flynn was one of the original members of the St. James Society. Cardinal O'Malley said Father Flynn was serving in Latin America, running a Catholic radio station, when they first met.

Father Arthur Driscoll was a Boston priest for almost 70 years. His assignments included serving as the dean of studies at St. John Seminary.

In his homily, Cardinal O'Malley talked about the Gospel reading, part of St. John's account of the raising of Lazarus from the dead. The cardinal said that Jesus' late arrival in Bethany after his friend's death was like missing the wake and funeral.

"In these days, all of us are a little like Jesus in today's Gospel, missing the wakes and funerals of our loved ones. This has been one of the most painful aspects of the social distancing," Cardinal O'Malley said.

He spoke at length about the events that take place in Bethany as well as Jesus' relationships with Lazarus, Martha, and Mary.

When Jesus arrives after Lazarus' death, "Martha expresses that sentiment that invades all of our hearts at the moment of suffering, at the moment of tragedy, when we all want to say 'Lord, if you had only been here, this wouldn't have happened,'" Cardinal O'Malley said.

Martha then tells her sister Mary, "The Lord is here and is calling you."

"One of the great lessons of Bethany is that discipleship is an invitation, a call, a vocation to friendship. Whenever we kneel before the tabernacle, let us remember Martha's words," Cardinal O'Malley said.

The cardinal said Bishop Allué and the five priests being remembered at the Mass had responded to the invitation to discipleship and priesthood. Cumulatively, they had given more than 350 years of pastoral service, including "some of the most challenging times in the history of our Church."

"Our six brothers, whose passing we remember today, like Lazarus, were friends of Jesus and lived the life of the resurrection. They were men of faith, who lived their priestly vocations faithfully and generously," Cardinal O'Malley said.