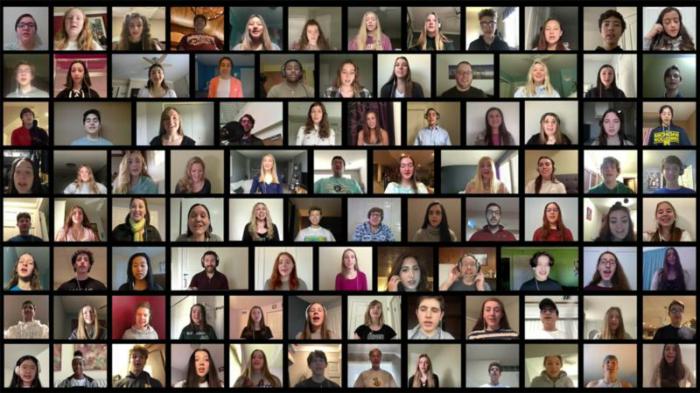 The choir at Notre Dame Preparatory High School in Pontiac, Mich., and several teachers and alumni sing "He Never Failed Me Yet" in a video released on YouTube April 19, 2020. (CNS/YouTube screen grab)

PONTIAC, Mich. (CNS) -- Notre Dame Preparatory High School's choir and alumni are bringing the world a little closer together, even when it remains far apart.

On April 19, the school released a video that featured 92 singers -- 67 current students and 25 alumni and teachers -- singing a rendition of "He Never Failed Me Yet" by Robert Ray, best known for his 1979 "Gospel Mass."

The five-minute video features shots of all 92 singers performing in unison, conducted by David Fazzini, director of choirs at Notre Dame Prep.

Fazzini said he was thinking about a virtual choir performance ever since the school closed its doors in March because of the COVID-19 pandemic, and seeing videos of similar performances persuaded him that the choir should try it.

"When the we got stuck with the school closing down, it seemed like an easy way to go," Fazzini told Detroit Catholic, the online news platform of the Archdiocese of Detroit.

Fazzini recorded the different voice parts with his daughter, Chloe, an alumna of the choral program, and then sent those parts of the song to the students to practice and record a video of them singing.

"I recorded a video of myself conducting the song with their track as audio," Fazzini said. "So they watched a video of me conducting and used their phone to record their audio. So each student had to prepare themselves on their own with these materials."

The students sent the videos of them singing back to Fazzini, who then edited and synced the videos together to make the finished product -- about 40 hours of editing, by his guess.

"I work in a couple of different music groups that do weddings and different events around town, making small music videos that use five or six different angles," Fazzini said. "This had 92 different angles of video, 92 separate videos that had to be synced. Overall, it was 10 times what I have been used to."

The end result shows all members of the 92-voice choir at times on a grid eight frames high and 12 across, featuring solo performances from Chloe Fazzini and another Notre Dame Prep alumna, Gracie Calvaneso, who is currently pursuing a music career in Nashville, Tennessee.

In a time when the world seems upside down, David Fazzini is glad the song has been so well received, with more than 6,300 views.

"I picked the song not only because it's one of my favorite gospel tunes, but my wife was talking about linking it to Divine Mercy Sunday, because the song is all about singing of God's mercy," Fazzini said; the April 19 release of the video coincided with Divine Mercy Sunday. "I'm super happy with the results."

Fazzini said the greatest technical challenge for the singers was staying in rhythm and breathing together despite singing by themselves. Fazzini noted the cutoffs each of the singers recorded synced well together and required little editing, a credit to his students' and alumni's ability to adapt.

"What makes this whole feel process feel so great is that it is reaching so many people," Fazzini said. "It's about being inspired to have hope and faith, and if it links people to this idea of Divine Mercy, this great gift with have, then that's just amazing."

The Fazzini-Notre Dame effort isn't the only such one in the Catholic world.

In Italy, Coro Navicella got its 28 members to sing "Regina Coeli" a cappella in four-part harmony. A few new faces pop up from time to time, but each singer had to record separately, and then be mixed into the final version.

Also, Oregon Catholic Press gathered dozens of Catholic liturgical musicians, dubbing them "Catholic Artists From Home," to sing "Be Not Afraid," the popular hymn written by Jesuit Father Bob Dufford of St. Louis Jesuits fame. The video contains a fourth verse to the hymn not found in many hymnals.

Editor's Note: The videos can be seen here:

"He Never Failed Me Yet": https://www.youtube.com/watch?time_continue=18&v=PwfyVjVrMGA&feature=emb_logo

Meloy is a staff writer for Detroit Catholic, the online news platform of the Archdiocese of Detroit.