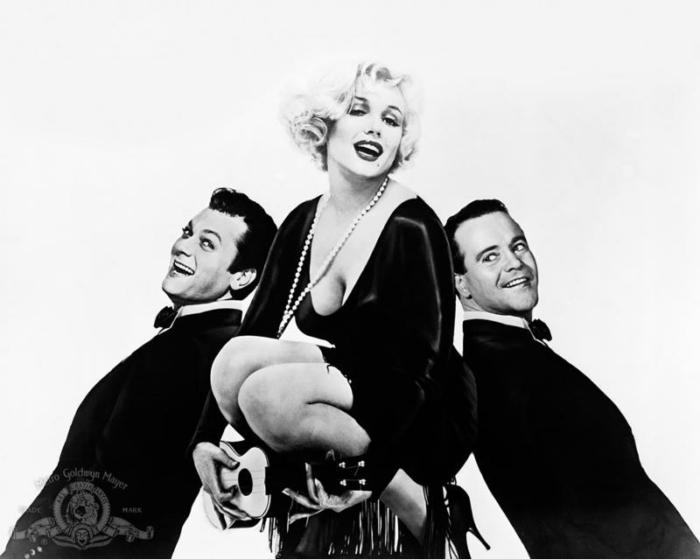 NEW YORK (CNS) -- The following are capsule reviews of theatrical movies on network and cable television the week of May 31. Please note that televised versions may or may not be edited for language, nudity, violence and sexual situations.

Sunday, May 31, 5:45-8 p.m. EDT (TCM) "Some Like It Hot" (1959). Two musicians (Jack Lemmon and Tony Curtis) witness the St. Valentine's Day massacre at the height of Chicago's gangster era and must disguise themselves as women to escape the mob, joining an all-girl band, with one of them falling for the lead singer (Marilyn Monroe). Director and co-writer Billy Wilder's farce is a classic that has stood the test of time. Some innuendo and risque humor, discreet sexual situations, comic gangster violence. The Catholic News Service classification of the theatrical version was A-III -- adults. Not rated by the Motion Picture Association.

Monday, June 1, 6-10 p.m. EDT (AMC) "The Dark Knight Rises" (2012). The lavish conclusion to director and co-writer Christopher Nolan's "Dark Knight" trilogy will not disappoint dedicated Batman fans. But casual viewers may find its 164-minute running time bloated and unwieldy. Set eight years after the events of 2008's "The Dark Knight", the latest adventure finds billionaire playboy Bruce Wayne (Christian Bale) injured, exiled and grief stricken. Yet, inevitably, he and his chiropteran alter ego find themselves pulled out of retirement. Initially, that's due to the arrival on the scene of a morally ambiguous cat burglar (Anne Hathaway). But it's a terrorist mastermind (Tom Hardy) who really forces the Caped Crusader to don the cowl once more. Nolan's script evinces a surprising amount of humanity and emotion -- especially so as it shows us Wayne's touching relationship with his long-serving butler (Michael Caine). While the bone-breaking nature of the mayhem on display excludes the youngest bat fans, some parents may deem this acceptable fare for older adolescents. Frequent and intense action violence, including gunplay, an implied nonmarital encounter, a few uses of profanity, some crass terms. The Catholic News Service classification of the theatrical version was A-III -- adults. The Motion Picture Association rating was PG-13 -- parents strongly cautioned. Some material may be inappropriate for children under 13.

Wednesday, June 3, 8-10 p.m. EDT (ABC) "Up" (2009). Off we go into the wild blue yonder -- literally -- with this instant classic, the story of a grumpy septuagenarian (voice of Ed Asner) who decides to get away from it all by relocating his home to South America with the help of thousands of colorful balloons. Joined by an earnest 8-year-old stowaway (voiced by Jordan Nagai), a gigantic squawking bird, and a "talking" dog, he finds the adventure of a lifetime as the ragtag group battles evil in the Venezuelan jungle. This touching fable from director and co-writer Pete Docter offers lessons for young and old on love and loss, marriage, friendship and perseverance in a gorgeously rendered, very amusing and highly entertaining film. Some serious thematic material and a few scenes of intense peril may disturb small children. The Catholic News Service classification of the theatrical version was A-I -- general patronage. The Motion Picture Association rating was PG -- parental guidance suggested. Some material may not be suitable for children.

Thursday, June 4, 6-8 p.m. EDT (Showtime) "Back to the Future" (1985). Above-average entertainment about a teenager (Michael J. Fox) who is transported back through time and obliged to serve as matchmaker for his parents or face retroactive nonexistence. A major problem is that his mother-to-be finds him far more attractive than she does his father-to-be. Directed by Robert Zemeckis, it is funny and clever with a bit of genuine sentiment, but unfortunately is marred by casual profanity, the depiction of violence as manly and, though there is no depiction of it, an implicit acceptance of sexual promiscuity as standard teenage behavior. The Catholic News Service classification of the theatrical version was A-III -- adults. The Motion Picture Association rating was PG -- parental guidance suggested. Some material may not be suitable for children.

Saturday, June 6, 8-10 p.m. EDT (HBO) "Ad Astra" (2019). Compelling sci-fi drama, set in the near future, in which an astronaut (Brad Pitt) goes on a quest to communicate with his father (Tommy Lee Jones), a pioneer space traveler who long ago disappeared during a mission to search for extraterrestrial life from the outer boundaries of the solar system. As he endures a variety of challenges, he broods on his emotional isolation and inability to maintain relationships while also pondering the conflicting evidence suggesting that his dad, long portrayed as a deceased hero, may not only be alive but may, in fact, be a villain. By turns an epic and an intimate character study, director and co-writer James Gray's moody film features several brief scenes of prayer that will intrigue believers and that, along with the overall artistic merit of the enterprise, may convince the parents of older teens to let them join the audience. Some gory violence, a suicide, a couple of profanities, at least one use each of rough and crude language, an obscene gesture. The Catholic News Service classification of the theatrical version was A-III -- adults. The Motion Picture Association rating was PG-13 -- parents strongly cautioned. Some material may be inappropriate for children under 13.