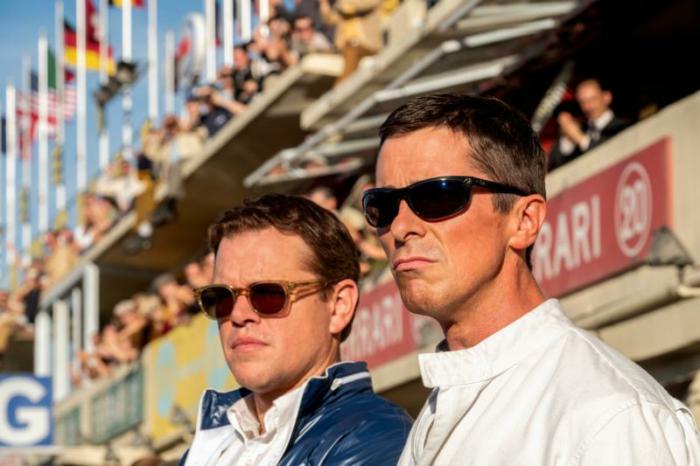 Matt Damon and Christian Bale star in a scene from the movie "Ford v. Ferrari." The Catholic News Service classification is A-III -- adults. The Motion Picture Association of America rating is PG-13 -- parents strongly cautioned. Some material may be inappropriate for children under 13. (CNS photo/Twentieth Century Fox)

NEW YORK (CNS) -- The following are capsule reviews of theatrical movies on network and cable television the week of June 14. Please note that televised versions may or may not be edited for language, nudity, violence and sexual situations.

Sunday, June 14, 11 a.m.-2 p.m. EDT (AMC) "Erin Brockovich" (2000). Fact-based tale of an earthy single mom (Julia Roberts) who persuades her litigator boss (Albert Finney) to pursue a class-action suit against a major California utility for contaminating local waters. As directed by Steven Soderbergh, Roberts vividly captures a foul-mouthed but good-hearted woman who makes something of herself in doggedly seeking justice for families beset by cancers. An implied affair, some profanity, much rough language. The Catholic News Service classification of the theatrical version was A-III -- adults. The Motion Picture Association rating was R -- restricted. Under 17 requires accompanying parent or adult guardian.

Saturday, June 20, 9-10:45 a.m. EDT (Showtime) "Leap Year" (2009). Likable romantic comedy in which a controlling Boston real estate consultant (Amy Adams) follows her commitment-shy live-in boyfriend (Adam Scott) to Ireland. There, he's attending a cardiologists' convention and she hopes to take advantage of a national tradition allowing women to propose on Leap Day, but bad weather derails her plans. This forces her to rely on a laidback rural innkeeper (Matthew Goode) to get her to Dublin in time. Though the background details are closer to 1952's "The Quiet Man" than to the post-Celtic Tiger contemporary reality, the central opposites-attract relationship in director Anand Tucker's Hibernian idyll is old-fashioned in the best sense, with physical restraint allowing room for a dexterously acted, if somewhat formulaic, portrayal of deepening emotional engagement. It helps to make this -- despite the elements described below -- probably acceptable for older teens. Implied cohabitation, some mildly sexual humor, at least two uses of profanity and one of the S-word, a few crass terms. The Catholic News Service classification of the theatrical version was A-III -- adults. The Motion Picture Association rating was PG -- parental guidance suggested. Some material may not be suitable for children.

Saturday, June 20, 8-10:35 p.m. EDT (HBO) "Ford v Ferrari" (2019). A film that revels in its 1960s gender stereotypes, evoking a "Great Man" age of auto racers in which the men were men and the women glad of it. Director James Mangold, working from a screenplay by brothers Jez and John-Henry Butterworth and Jason Keller, keeps the story stripped down to the competition between automakers Ford (led by Tracy Letts and Jon Bernthal) and Ferrari (its namesake founder played by Remo Girone) to have their cars win the grueling 24-hour Le Mans road race in 1966. Car developer Carroll Shelby (Matt Damon) and daredevil British driver Ken Miles (Christian Bale) fight off their personal troubles to form a successful partnership in which they also keep the corporate types at bay. Probably acceptable for mature teens, despite some salty dialogue. Intense action sequences, fleeting crude and crass language, a single racial slur. The Catholic News Service classification of the theatrical version was A-III -- adults. The Motion Picture Association rating was PG-13 -- parents strongly cautioned. Some material may be inappropriate for children under 13.