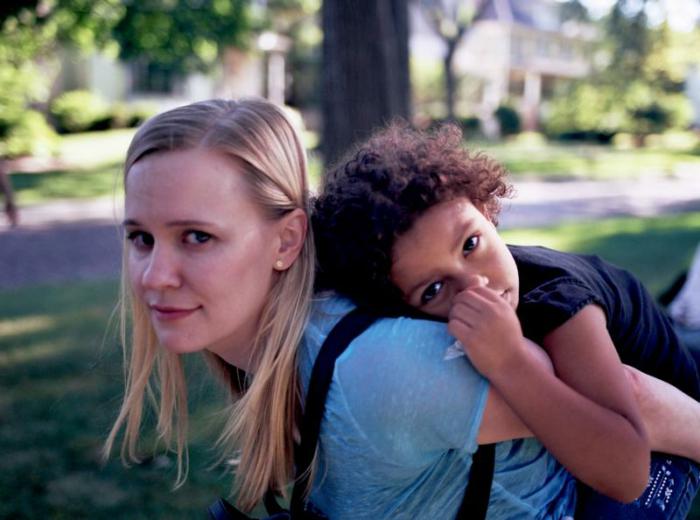 Kelly O'Sullivan and Ramona Edith Williams star in a scene from the movie "Saint Frances." The Catholic News Service classification is O -- morally offensive. Not rated by the Motion Picture Association.

NEW YORK (CNS) -- A grotesque treatment of abortion and a misguided view of faith are the most notable elements of "Saint Frances" (Amazon). A mix of comedy and drama written by and starring Kelly O'Sullivan, the would-be charming film, directed by Alex Thompson, groans under the burden of its own amorality.

O'Sullivan demonstrates undeniable talent in her role as Bridget, an adrift 34-year-old woman who prefers to spend her summer nannying a little girl named Frances (Ramona Edith-Williams) rather than continue in her previous job as a waitress. Though she eventually bonds with the initially indifferent Frances, Bridget fails repeatedly to show the kind of maturity her new position requires.

On her own time, Bridget has emotionless sex with quasi-boyfriend Jace (Max Lipchitz). This leads to an unwanted pregnancy -- unsurprisingly, given that Bridget's version of contraception is to have Jace uncouple at the last moment.

Refusing even to discuss any alternative to, as she puts it, "getting rid of it," Bridget destroys her child, after which O'Sullivan's script insists that any residual guilt or remorse Bridget might feel is misplaced and represents a chink in the armor of her secular feminism. There are physical after-effects, however, which leads to the movie's strange preoccupation with Bridget's menstrual cycle.

The proceedings reach a nauseous nadir as, in the midst of her at-home abortion, Bridget and Jace speculate whether some portion of what her body has expelled as a result of the drugs she's been prescribed is, in fact, their baby -- or, as Bridget prefers to term it, the "mass of cells" they conceived.

The other main story line concerns Frances' parents, lesbian couple Maya (Charin Alvarez) and Annie (Lily Mojekwu). Having just given birth to a son, presumably through artificial insemination, Maya is suffering from postpartum depression, which -- as a result of their inability to communicate openly about the problem -- puts a strain on her relationship with Annie.

Maya is shown to practice Catholicism on her own terms, praying and adorning one of the hallways of the home she and Annie share with an icon of the Virgin Mary. This image unnerves Annie and momentarily unsettles Catholic-bred and -educated Bridget as well.

During the party that follows the baptism of Maya's newborn, Bridget wanders into the now-empty church where the ceremony took place and finds Frances occupying the priest's side of a confessional. The two enact a mock confession, the implicit message of which seems to be that, while thoroughly alienated from the church, Bridget also is somewhat haunted by it.

Frances calls Bridget out for lying a lot, an accusation that earlier scenes have demonstrated to be true. But the slaying of her child is conspicuously absent from Bridget's list of sins.

It's hard to imagine a movie better suited to jar on believers' sensibilities than this discordant salute to off-kilter values.

The film contains a benign view of abortion, casual sex and homosexual acts, graphic nonmarital sexual activity, irreverent humor, at least one use of profanity and considerable rough and crude language. The Catholic News Service classification is O -- morally offensive. Not rated by the Motion Picture Association.

A grotesque treatment of abortion and a misguided view of faith are the most notable elements of this mix of comedy and drama charting the friendship between an adrift 34-year-old woman (Kelly O'Sullivan) and the little girl (Ramona Edith-Williams) she nannies for a summer. As written by O'Sullivan and directed by Alex Thompson, the would-be charming film groans under the burden of its own amorality as the main character has emotionless sex (with Max Lipchitz) that leads to an unwanted pregnancy and her charge's lesbian parents (Charin Alvarez and Lily Mojekwu) find their relationship strained by the postpartum depression one, who is shown to practice Catholicism on her own terms, is experiencing. A strange preoccupation with the heroine's menstrual cycle is just one more jarring note in this discordant salute to off-kilter values. A benign view of abortion, casual sex and homosexual acts, graphic nonmarital sexual activity, irreverent humor, at least one use of profanity, considerable rough and crude language. The Catholic News Service classification is O -- morally offensive. Not rated by the Motion Picture Association.