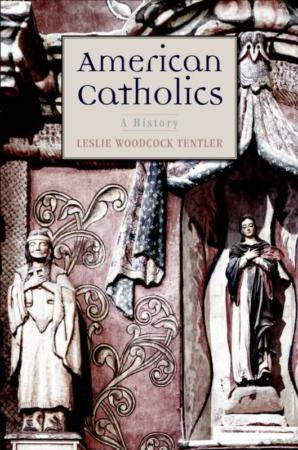 This is the book cover of "American Catholics: A History" by Leslie Woodcock Tentler. The book is reviewed by Nancy L. Roberts. (CNS)

This sweeping history starts with the first Spanish missionary settlements in what later became the United States, and continues to the present, a journey of nearly 500 years.

Along the way, Leslie Woodcock Tentler, professor emerita of history at The Catholic University of America in Washington, illuminates myriad topics sure to fascinate not only Catholics, but anyone interested in a major religion's impact on American life and culture.

Tentler's new book displays the same meticulous research that distinguishes her earlier works (such as "Catholics and Contraception: An American History"), as well as her signature elegant and engaging writing style.

In a preface far more interesting than most, Tentler candidly describes her own childhood experiences with Catholicism. "I cannot remember a time when I was not fascinated by Catholics," she writes, even though, as she explains, she was not actually raised "in the faith." She did live in a "heavily Catholic neighborhood" in Detroit and her beloved grandmother was a Catholic, but her parents were anti-Catholic.

All of this reinforced her feeling that "whatever one's view of the church, it was not an institution that could be ignored." After the Second Vatican Council's reforms, she found herself becoming a Catholic, which fulfilled her need for "a church that, while professing to claim ultimate truth, was also willing to concede that it did not have all the answers."

These experiences likely contributed to the mature insight with which Tentler recounts the story of a church that, like all human institutions, has its flaws. For example, she does not shy away from acknowledging that early Spanish explorers such as Hernando de Soto and Francisco Vasquez Coronado in the early 16th century held "a vision of empire -- simultaneously generous and profoundly coercive."

The Spanish conquerors inflicted "horrific brutality" on the native peoples, enslaving them and killing them through exposure to diseases against which they had no immunity, such as smallpox, diphtheria, influenza and measles. Although priests accompanied both early explorers, "little real evangelizing took place" at first.

Tentler notes that, "Generally responsible for making initial peaceful contact with the local indigenous population, the missionary was then expected to transform them into Christianized subjects of the Spanish crown." Thus, Catholicism functioned here as a tool of European sovereigns who sought to exploit the natural resources of the New World.

The French Jesuits who evangelized in New France in the 17th century showed more readiness to accept the Indians as a distinctive culture. Priests such as Jacques Marquette lived among them, learned Indian languages and respected their tribal practices.

"French Jesuits came closer than other colonials to a genuine transcultural encounter, which gave rise not just to a respect for the other, but to a richer sense of Christian universalism," Tentler writes.

Twelve Ursulines arrived in New Orleans in 1727 and immediately began to serve as nurses and then opened a school and cared for orphans. The Poor Clares arrived in Washington in 1798, where they started a free day school, a tuition-charging boarding school and an orphanage. There were several others, including the Religious of the Sacred Heart who settled in St. Louis in 1818, followed there in 1836 by the Sisters of St. Joseph.

Tentler's analysis shows how these "women religious in New France created a template of sorts for the nascent church in the United States," one that was oriented toward flexibility and independence.

They also reflected the social mores of the time. The New Orleans Ursulines owned 80 slaves, making them one of the largest slaveholders in their region. Yet in their schools, they also educated free women of color right alongside elite white women.

They were hardly the only religious orders who were slaveholders; others included English Jesuits in Maryland and French Jesuits in the Louisiana Territory. Tentler's scrutiny of extant records did not "suggest that slaveholding religious had moral qualms" about slavery. Slavery was the norm and its being "equally widespread in colonial America among Indians as well as Europeans" gave it "an aura of legitimacy."

Tentler brings similar attention to the nuances in her riveting account of Catholic clerical life on the frontier in the early 19th century.

"Priest-poor and starved for cash," frontier bishops often traversed thousands of miles through the wilderness on foot and horseback to tend their far-flung flocks. Their poverty-stricken priests had roughened hands and weathered faces from their day-to-day chores such as carpentry and tending kitchen gardens as well as the occasional cow and chickens. Not for them the European ideal of gentlemanly clerical attire; instead, they were as likely to be attired in buckskin as their congregants.

All this created a bond of shared experience, quite different from the more formal distance between clergy and laity that was seen in the urban parish.

In subsequent chapters, Tentler addresses the impact of Catholics who immigrated from Ireland, Germany, Italy and other countries in the early 19th century and the nativist anti-Catholicism that they faced, the institutionalization of the church in the 19th and 20th centuries, and the growth of Catholic education and intellectual life as well as Catholic participation in politics and public life.

Throughout, she illuminates how laypeople practiced Catholicism over the years and how the clergy influenced society. She also delves into topics such as race issues and Catholics (particularly in the time of the Civil War), and current issues including the role of women in Catholic parish life, Catholic teachings on reproductive ethics and the clerical sex abuse crisis.

The result is a wide-ranging and thoroughly up-to-date analysis. This consistently well-balanced work is a gem that will long set the standard.