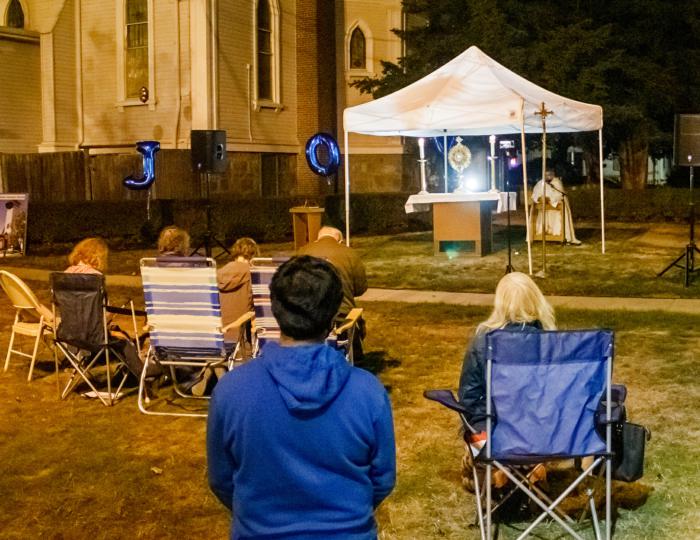 QUINCY -- "What the world needs right now is joy," Father Matt Williams, the pastor of the St. John the Baptist and St. Joseph Parish Collaborative in Quincy told The Pilot this summer. Three months later, as the collaborative celebrated the impact of its JOY movement with a commissioning ceremony for its volunteers on Sept. 25, his words seemed to have proven true.

Joy is a fruit of the Holy Spirit (listed in Galatians 5:22-23), but the collaborative has been using it as an acronym for "Jesus, Others, Yourself." This ordering of priorities has become their model for stewardship. As Father Williams explained, it is about making "a sacrifice of praise" by spending time in prayer and offering service to neighbors, especially those experiencing hardship during the pandemic.

"Instead of seeing the pandemic as an obstacle," he said in a Sept. 18 interview, "it becomes an opportunity for us to provide a service and outreach to people, to families that are struggling in this hour."

The idea for the JOY movement came about as "the fruit of prayer and conversation" among the Collaborative Pastoral Team. The movement launched on June 11 through a virtual "town hall" meeting, and was publicized through weekly bulletins, announcements at the end of Masses, and the collaborative's YouTube channel. Parishioners were invited to not only become engaged with the life of the parish but also to invite others to participate in it.

The reach of the JOY movement has been both wide and deep, impacting the parish's finances, ministries, and sacramental life.

"Our volunteer base is up, people are stepping up to help in the life of the community, and our offertory and sacrificial giving has increased dramatically," Father Williams said in a Sept. 29 email to The Pilot.

The collaborative has held drive-through confessions and daily Holy Hours throughout the pandemic, both of which have been well-attended.

"It's pretty amazing, and the response has been incredible," Andrea Alberti, the collaborative's director of evangelization and outreach, said Sept. 18.

St. John the Baptist Parish ran a successful Vacation Bible School over the summer. Now that faith formation is resuming, they are offering a weekly, daylong program for grades one through eight, "St. J's Wednesdays," to provide homework help, sacramental preparation, and a chance to socialize in a safe environment.

Alberti said the JOY movement is "a huge influence" on faith formation this year, which will seek to engage parishioners and help them deepen their relationships with Jesus and with other people.

Perhaps the easiest area of impact to measure is the collaborative's financial situation. At the time of the town hall meeting, Pete Culhane, the business operations and finance manager, estimated that St. John the Baptist Parish had enough savings to sustain it for 23 months, while St. Joseph Parish had enough for 10 months.

Help came in the form of government loans and large donations. Culhane thought the generous tithing would not continue, but against his expectations, more donations came in. Since the beginning of the JOY movement in June, St. John the Baptist's weekly offertory has increased by 36 percent, and St. Joseph's by 38 percent. Some parishioners have enclosed notes with their mail-in offerings, saying that they were donating on behalf of those who could not afford to give more.

"People have been so generous, and it's so moving for me," Culhane said, speaking to parishioners at the JOY Night held on Sept. 25. On that night, the collaborative held a ceremony outside St. John the Baptist Church to commission 107 of its volunteers as "JOY ambassadors."

Like at their outdoor Masses, parishioners brought lawn chairs and spread out across the grounds for the event, which included a Liturgy of the Word, praise and worship music, a period of Eucharistic adoration, and bonfires.

In his homily, Father Williams reflected on the Gospel reading of the Annunciation, pointing out how God asked for Mary's cooperation and continues to ask the same of each Christian.

"God was not going to save humanity without humanity's cooperation, without one person first and foremost to lead the charge," Father Williams said.

He paraphrased the words of speaker Christopher West, who has said that Mary believed, and in her belief conceived Christ, and then brought Christ forth into the world.

For this reason, he said, "the JOY movement is really a Marian movement."

Father Williams blessed each group of volunteers, including lectors, extraordinary ministers of Holy Communion, members of the collaborative pastoral council and finance council, ushers, sacristans, and those who do miscellaneous tasks in the parish. Some had been volunteering for many years, while others had begun recently, during the JOY movement.

Each volunteer received a pin and a lanyard with their name. Alberti read the names of the volunteers, who stood up by group to receive the blessing.

After the commissioning, there was a period of Eucharistic adoration. Then, Culhane gave some closing remarks, explaining how the financial situation has improved through parishioners' generosity.

"The JOY movement is working because of all of you, because you love your parishes," Culhane said. 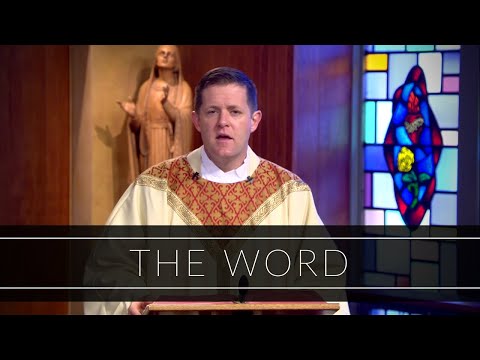