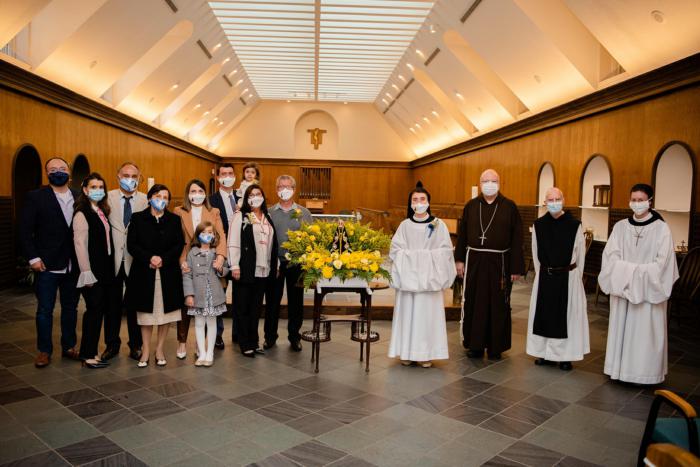 On the feast of Our Lady of Aparecida, Oct. 12, Cardinal O'Malley went to the Mount St. Mary's Abbey in Wrentham for the profession of final vows of Sister Karla Goncalves. Pilot photo/Raquel Goncalves

Since many dioceses have been unable to hold their Diocesan In-Services, the sixth and final milestone of the V Encuentro process, this national gathering was organized to allow dioceses to connect and then break up into diocesan delegations for discussion.

On Friday night, I was among a group of bishops who dialogued with young adults. Then, on Saturday, I was involved in two breakout sessions with our participants from the archdiocese. We are very grateful to Father Alejandro Lopez-Cardinale and Sister Elsa Narvaez-Rodriguez for all they have done in organizing and coordinating our local Encuentro activities.

The Virtual Encuentro concluded Saturday evening with a Mass celebrated by Archbishop Gomez of Los Angeles, who is also the president of our bishops' conference.

This Encuentro process has been a very good way to help people focus on Hispanic ministry, and we are confident it will bear fruit for years to come.

On Monday, the feast of Our Lady of Aparecida, I went to the Mount St. Mary's Abbey in Wrentham for the profession of final vows of Sister Karla Goncalves. Sister Karla worked with us for several years at the Pastoral Center before she began her vocation with the Trappistines.

Because of the pandemic, the number of people who were able to attend the profession was very limited. Thankfully, they were able to live stream the profession so that Sister Karla's many friends and relatives here and in Brazil could be part of this joyous event. With us in person were, of course, the sisters of the community; their new abbess, Mother Sofia Millican; Dom Vincent Rogers, the abbot of St. Joseph's Abbey in Spencer; Father Kevin Hunt, the chaplain to the sisters; and several members of Sister Karla's family.

I celebrated the Mass, and Abbot Rogers concelebrated and blessed the robes and led the profession ceremony along with Mother Sofia.

In my remarks, I told the sisters how very grateful I am for the many wonderful things that Cardinal Cushing did, and one of them was to bring the Cistercian Sisters of the Strict Observance, the Trappistines, to Wrentham. I also commented on the fact that the Archdiocese of Boston has such a young population, and yet so many of our young Catholics don't know any religious women.

I also said that I was very pleased that, in the last couple of months, we have had three religious professions -- the Daughters of St. Paul, the Daughters of Mary of Nazareth, and now Sister Karla's Solemn Profession as a Trappistine nun. I told them that this is a great sign of hope, and we pray that it will inspire other young women to embrace the vocation of consecrated life in the Church.

Meeting of the Council of Cardinals

Of course, on Tuesday, we had the meeting of the Council of Cardinals advising the Holy Father on the reform of the Roman Curia that I mentioned. During this session, we focused on an updated draft of the constitution "Praedicate evangelium" that will reorganize the Roman Curia.

We were very pleased that the Holy Father was able to be with us for this session.

As regular readers of the blog will remember, the council members have met several times virtually, but this was the first time the Holy Father has been able to attend since our last in-person meeting in February.

We are very grateful that the Holy Father has reappointed us all to another term on the Council, and he has also added Cardinal Fridolin Besungu of Kinshasa, who is also a Capuchin. So, from six we've gone to seven, and we have a new secretary for the Council, as well. Bishop Marco Mellino has been named to replace Bishop Marcello Semeraro, who has been appointed prefect of the Congregation for the Causes of Saints.