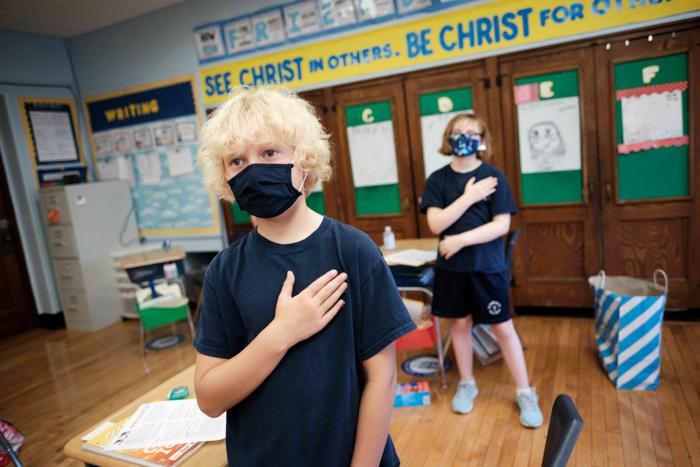 BRAINTREE -- Since the beginning of the academic year, the Catholic schools of the archdiocese have served as a case study of in-person learning during a pandemic. The results have been encouraging, according to the archdiocese's superintendent of Catholic schools, and have gained the recognition of the governor of Massachusetts as evidence that in-person instruction is safe when health and safety protocols are followed.

In a Sept. 17 post on Twitter, Superintendent Thomas Carroll said that the Catholic schools' "Spring of Despair -- caused by an historic enrollment drop due to the pandemic -- has turned into an Autumn of Hope."

He echoed this sentiment in an Oct. 30 interview with The Pilot, noting that the schools experienced "very tough sledding in the spring."

The Catholic schools faced a decline in enrollment as financial difficulties caused by the coronavirus pandemic prevented many families from being able to afford tuition. As a result, the archdiocese closed nine schools, the largest number in almost 50 years. By July 1, the confirmed enrollment was down 5,700 from the previous school year, the greatest drop in the archdiocese's history.

However, by an unexpected turn of events, this negative trend reversed over the summer.

On July 15, the three major teachers' unions held a press conference announcing that they wanted the school districts to open three weeks later than planned, and to open remotely rather than in person. The archdiocese's Catholic schools, on the other hand, had already made it known that they would open with full-time live instruction as soon as they were allowed to do so.

Carroll said that as soon as the unions made their announcement, phones started ringing in all of the archdiocese's 100 schools as parents sought to enroll their children. From that time until mid-October, the Catholic schools gained 4,400 students, the largest enrollment surge to ever take place in the archdiocese.

In order to hold live instruction, Carroll said, the schools had to prepare for the "twin challenges" of gathering enough personal protective equipment (PPE) and outfitting classrooms with new technology.

A "surplus" of webcams, computers, microphones, and tripods, as well as extra PPE, were purchased and stored at "strategic points" throughout the archdiocese for resupply if needed.

Recognizing that some parents may wish to keep their children at home, the schools made it possible for teachers to live stream their content from their classrooms for students who preferred or needed to learn remotely. Carroll said this was "extremely complicated" and required "a massive amount of training," since approximately 4,200 adults work in the Catholic schools.

"Much to our amazement," Carroll said, only a few schools had technology issues during the first week of the academic year.

"It's been pretty much smooth sailing," he said.

Carroll said that, by this point, almost three months into the school year, he would have predicted that the schools would be experiencing high rates of coronavirus cases. But that has not happened. As of Oct. 30, there were only 34 active cases among 35,500 students and employees in the archdiocese's Catholic schools. In each case, the infection can be traced to contact outside the school community. So far, there has not seemed to be any spread of the coronavirus within a school.

In Carroll's view, this means the assumption that schools would be "super-spreaders" of the virus has been disproven. Because no cases have originated from inside any of the schools, Carroll believes that the state's health protocols, which the Catholic schools have been "implementing fastidiously," are working.

"The moral of the story is, the safest place for a kid is at school," Carroll said.

He noted that some individual schools have closed for a couple weeks and then reopened. He said he thinks that will be the pattern for many schools over the course of the academic year.

"Our biggest hope is that the schools in total don't get closed down like they were last year," Carroll said.

Gov. Charlie Baker has taken note of the Catholic schools' success in staying open without spreading the virus. He acknowledged it during an Oct. 27 press conference, pointing out that in the Catholic schools, "we have one of the best active demonstrations about in-person learning going on."

Based on their experience, "there is very little evidence that this virus spreads in schools," Gov. Baker said.

Carroll shared a two-minute clip of the press conference on Twitter.

"Right now, it looks like the schools are the safest place to be. And as long as that continues to be true, we're going to continue to stay open as long as we're allowed to," Carroll said.