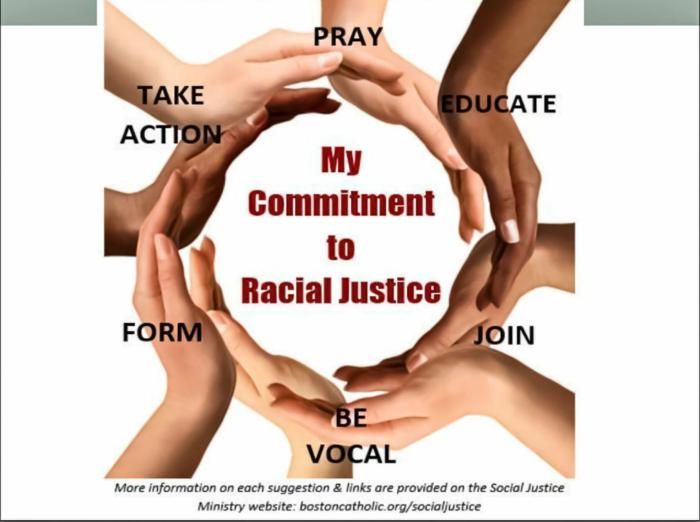 BRAINTREE -- Over 600 people participated in the archdiocese's 12th annual Social Justice Convocation, which took place in a virtual format on Nov. 7. Focusing this year on the topic of racial justice, two recurring themes emerged from the speakers' presentations: the idea of the "beloved community," and the Church's task of reckoning with its history.

The convocation traditionally serves as an opportunity for individuals and organizations to network, share stories and resources, and learn about Catholic social teaching. This year, the event was organized in collaboration between the archdiocese's Social Justice Ministry and the social justice committee of St. Katharine Drexel Parish in Dorchester.

The program began with a prerecorded Mass offered by Cardinal Sean O'Malley and Father Oscar Pratt at the Cathedral of the Holy Cross. Cathedral High School principal Nampeera Lugira served as a lector. Cardinal O'Malley delivered the homily, in which he underscored the sinfulness of racism.

"Racism denies the dignity of every human being, revealed by the mystery of the Incarnation, and blasphemes the redemptive act of Christ, who died on the cross to save all people," Cardinal O'Malley said.

He said that the Church exists to evangelize, and an important way it has always evangelized is through the life of the community.

For this reason, Cardinal O'Malley said, "it's very important for us as a community of faithful to work to eradicate racism from our midst so that we can really announce the Gospel of Jesus Christ in a coherent way."

The Mass was followed by a panel discussion moderated by Byron Wratee, a member of St. Katharine Drexel Parish's social justice committee.

Father Pratt, the pastor of St. Katharine Drexel Parish, spoke about the societal, ecclesial, and pastoral aspects of how racism and racial injustice remain a challenge for the Church.

At different points in his presentation, Father Pratt sang different verses of the civil rights anthem "We Shall Overcome." He said that the pronoun "we" in that song refers not only to black people and their allies, but to all people.

He also reflected on the concept of the "beloved community," which Martin Luther King, Jr. often wrote and spoke about.

"This is our task every day, to seek out and bring about the beloved community, the kingdom of God on Earth, where all people are recognized as being made in the image and likeness of God, where there is no place for racial division, for hatred, oppression, dehumanization, or any affliction of the soul that keeps us from loving one another and witnessing to God's divine will," Father Pratt said.

He read the parable of the Final Judgment in Matthew 25, in which Jesus proclaims, "When the Son of Man comes in his glory ... he will sit upon his glorious throne, and all the nations will be assembled before him. And he will separate them one from another, as a shepherd separates the sheep from the goats."

Father Pratt suggested that the sheep and the goats may represent not only individuals but also entire social groups.

"What we do as a collective whole, as a body politic, as a family of humanity, matters to God as much as what we do in our individual efforts responding to the call to love," Father Pratt said.

Looking back on the Church's history, he compared the writings of two priests who lived when slavery was legal in the United States and had differing opinions on whether it was an ethical practice. He said that some religious orders in the United States would have expected applicants to bring their slaves to become the communal property of the order.

"Knowledge and understanding of history is essential to the 'us' and the 'them' truly becoming 'we.' It is essential to building up the beloved community," Father Pratt said.

Professor Jeannine Hill Fletcher, a professor of theology at Fordham University and the author of "The Sin of White Supremacy: Christianity, Racism, and Religious Diversity in America," spoke at length about how white American Catholics historically failed to combat slavery and racism, and how the failures of the past continue to be felt today.

She pointed out that in the parable of the sheep and the goats, Jesus' love is balanced with judgment.

"It's in this tension (between) the call to love and judgment that I experience the history of white Catholicism in the United States as an epic failure to love," Hill Fletcher said.

First, she said, European Christians failed to love the original inhabitants of what would become the United States. Pope Alexander VI was the one who issued what would become the doctrine of discovery, encouraging European explorers to take away indigenous peoples' land and teach them morals. The "ideology of Christian supremacy" was written into law in 1823, dispossessing non-Christian nations of their land and setting them up for generations of poverty.

"To extend the parable of the sheep and the goats, will the Final Judgment include not only the ways white Christians did not clothe, feed, and care for their neighbors individually, but will it also include the way a white Christian nation created the conditions of poverty by taking land and resources from indigenous peoples?" Hill Fletcher reflected.

In her presentation, Hill Fletcher shared a few slides to illustrate Boston's history of slavery and racism. One slide showed 19th-century articles from The Pilot reflecting the debate within the Church about slavery and emancipation. Another featured a map reflecting the issue of redlining in Boston neighborhoods.

"You might ask yourself what injustice from the economy of enslavement helped to build the Catholic institutions that you are part of," Hill Fletcher suggested.

Hill Fletcher, who is white, said she laments how she has benefited from the Church's history of injustice as a member of institutions that benefited from directing resources to white Christians and away from people of color.

"I too want to live in that beloved community, so I too have a part in the repair and reparation of our failures of the past," Hill Fletcher said.

The Boston College Liturgical Arts Group provided a musical interlude before the question-and-answer session, which addressed Joe Biden's projected winning of the presidential election and the Church's stance on pro-life issues.

Participants in the convocation received "commitment cards" as well as surveys to help them discern how they would use the information they had gained and what they would endeavor to do to combat racism.

"This is not the end. Today we have celebrated together to build our awareness, to inspire action, but it's not enough. The urgency and importance of eradicating racial injustice and inequity will continue to be our priority," Dinneen said.

A recording of the Social Justice Convocation webinar can be viewed at register.gotowebinar.com/recording/5938397841251005964. More information about the archdiocese's Social Justice Ministry can be found at www.bostoncatholic.org/health-and-social-services/social-justice-ministry.