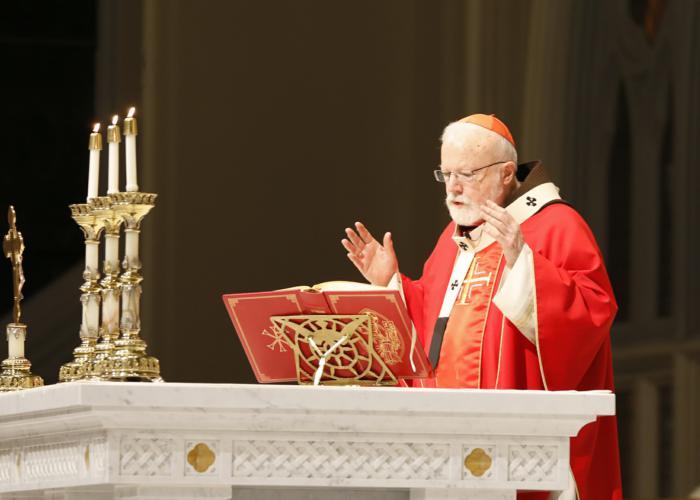 On Thursday, Nov. 12, Cardinal O'Malley celebrated a live-streamed Mass from the cathedral for the members of the Boston-area Order of Malta. Pilot photo/CardinalSeansBlog.org

On Friday, I had a Zoom meeting with FOCUS campus missionaries in the archdiocese. Ordinarily, we would meet for a dinner and a time of dialogue, but this time we did it virtually. The gathering was a chance for them to share with me, and with each other, some of their experiences working in the various universities during the pandemic. A number of the priests who are university chaplains were part of the meeting, as well, and they spoke about how wonderful it was to have the collaboration of the FOCUS missionaries.

We are very fortunate to have a wonderful team of FOCUS missionaries working in several of our universities here in Boston, and, of course, Father Michael Drea is also very involved with them nationwide. We are very grateful for their commitment and the witness of their lives that makes such an impact.

On Sunday afternoon, I attended a virtual gathering of the Ugandan Catholic community in the archdiocese for their annual harvest festival, which was held virtually this year. The Ugandan community is based at St. Mary Parish in Waltham so, of course, Father Michael Nolan was very involved. They also invited two bishops to greet them from Africa: the archbishop of Kigali Rwanda, Cardinal-designate Antoine Kambanda, as well as Bishop Serverus Jjumba of the Diocese of Masaka, Uganda.

During the gathering, they had different musical interludes, which were quite lovely.

We also heard testimonies from several members of the Ugandan community. One of them was a woman who spoke very beautifully about how, when she was sick during the pandemic, people in the community prayed for her, called her, and brought her food at a time when she felt very frightened and alone.

This was a wonderful opportunity to be able to address some of our African parishioners from the Ugandan community. Of course, we have ministries organized in many of our parishes for different African immigrant communities, including the Eritrean-Ethiopian Ge'ez Rite community here at the cathedral. Within the archdiocese, we also have very large Nigerian, Congolese, and Kenyan communities, in addition to the very vibrant Ugandan community. And, of course, there are Africans from many other countries. We are so grateful for the presence of these African Catholic communities, which are making such an important contribution to the life of our archdiocese.

On Thursday evening, I celebrated a live-streamed Mass from the cathedral for the members of the Boston-area Order of Malta.

With us in person at the cathedral were Boston-area Chairs Craig and Nancy Gibson and the chaplain to the Boston area, Father Jack Ahern, who concelebrated the Mass along with Msgr. Kevin O'Leary and myself.

Father Ahern is pastor of St. Gregory Parish in Dorchester, and when he came, he brought a lovely card from some of the K1 students at Pope St. John Paul II Catholic Academy Lower Mills Campus.

We are very grateful to the Order of Malta for all of the assistance they provide at the cathedral, particularly with the distribution of food to the homeless of the area. They also give invaluable assistance with the many safety measures we have needed to implement for the liturgies during the pandemic.

We are, of course, also grateful for all the good work they do worldwide, particularly on behalf of the sick and the poor. There are about 13,000 Knights and Dames of Malta and about 80,000 volunteers, and they have embassies in 110 countries, so they have quite an influence worldwide.