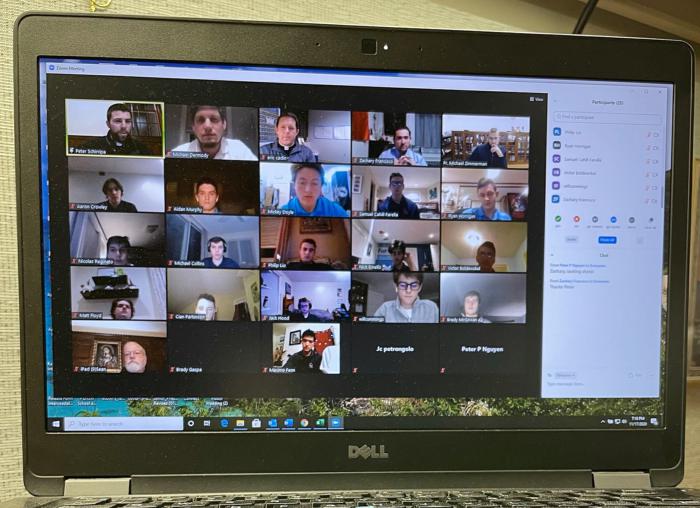 On Tuesday, Nov. 17, Cardinal O'Malley met via Zoom with young men considering a vocation to the priesthood. The virtual St. Andrew gathering was organized by Father Michael Zimmerman and Father Eric Cadin of the Vocations Office. Pilot photo/CardinalSeansBlog.org

Instead of gathering in Baltimore as we usually do for our Fall General Assembly of the U.S. Conference of Catholic Bishops, this year, we held our meeting virtually.

The pandemic has made this a very challenging year for all the national collections but, of course, the needs continue to be very grave. The Catholics of Boston are always very generous in supporting these collections, and the projects that are made possible because of their generosity are vital for the Church throughout the world.

On Saturday, we were happy to host a vocations retreat at the cathedral for college men and recent college graduates. About 40 men participated.

I celebrated Mass with them and, afterwards, heard talks, including one by Bishop Bob Reed.

Migration, of course, is always a very important topic for the bishops' conference. We are expecting to have more refugees involved in resettlement programs, and so this took up a lot of the discussion. We also heard from Sister Norma Pimentel about efforts to reunite children and parents who have been separated at the border.

During our meeting of the pro-life committee, there was great concern expressed that some of the pro-life policies currently in place, such as the Mexico City Policy, could be reversed under the new administration. We also discussed the upcoming March for Life in Washington DC and how we can promote more local observances on the day of the March and the time leading up to it. There was also some discussion of having a virtual vigil.

There is a great deal of thought being put into the virtual program that will be put on at noon on January 29, the day of the March for Life. We hope that we can invite our high school students in the archdiocese to join us for that virtual program. Normally, we take nearly a thousand people from the archdiocese to the March each year, most of whom are young people. I have often said that I find participating in the March for Life has been a very important experience for the faith life of our youth. I think it helps them to feel very much affirmed in their Catholic faith, their sense of community, and in embracing a mission of social justice in the Church's pro-life movement.

On Tuesday evening, we had a St. Andrew gathering via Zoom for young men considering a vocation to the priesthood. This particular gathering was with the students from Catholic Memorial High School, and, once again, it was organized by Father Michael Zimmerman and Father Eric Cadin of our Vocations Office.

We began by praying the Divine Mercy Chaplet together. Then Peter Schirripa, one of our seminarians who is in his second year of theology studies, gave a witness talk about his vocation. It was very eloquent, and I was delighted to hear him speak. I also addressed the young men and, afterward, the group was broken up into different breakout rooms, where they were able to have dialogues with the various seminarians who were accompanying them.