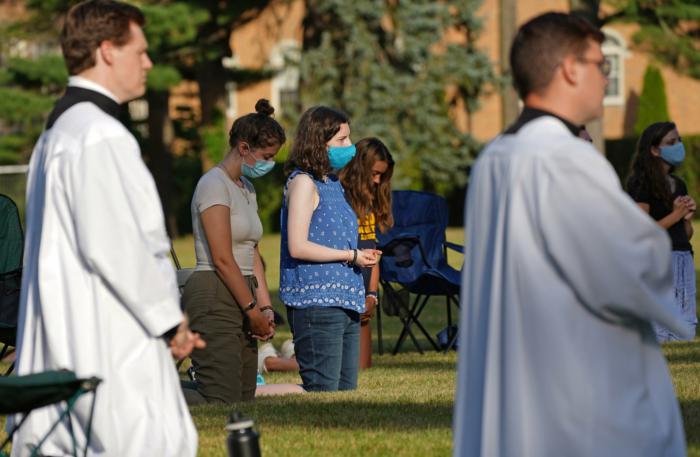 WASHINGTON (CNS) -- An annual survey on public attitudes toward religious faith by the Becket Fund for Religious Liberty indicates, not surprisingly, a considerable amount of objection to government-imposed limits on the size of congregations in houses of worship amid the COVID-19 pandemic.

"In a number of cases during the pandemic where houses of worship asked to receive equal treatment with businesses ... courts ruled that the place of business could receive higher priority," the report stated.

"But," it said, "when asked to compare priorities for reopenings after coronavirus outbreaks, a majority of respondents said that houses of worship should be treated with at least the same priority as reopened businesses," the report states.

Because respondents said "that religion is part of an individual's identity, not just a hobby or weekend activity," they also saw that it "requires protection and accommodations," the report stated.

That protection and accommodation even extends to ensuring hospital patients who request it still have access to spiritual care, as a recent intervention by the Office for Civil Rights in the U.S. Department of Health and Human Services made clear.

In two cases, citing safety protocols, hospitals had denied requests for priests to visit patients in order to administer baptism and anointing of the sick. HHS worked with the hospitals to make the in-person interactions possible with the use of personal protective equipment, an effort praised by the bishops' Committee on Religious Liberty.

"COVID-19 requires us to limit or modify our physical interactions to some degree, in order to reduce risks to physical health," said Archbishop Thomas G. Wenski of Miami, then the chairman of the USCCB Committee on Religious Liberty, in an Oct. 21 statement.

"Medical experts play a natural role in this effort but must avoid treating physical interactions in religious exercise as unnecessary or unacceptable risks because they are religious," he said. "Jesus Christ, physician of our souls and bodies, gave us the sacraments to convey God's grace and healing."

COVID-19 restrictions on houses of worship are at the center of the Diocese of Brooklyn, New York, filing an emergency application with the U.S. Supreme Court Nov. 12 for an injunction against Gov. Andrew Cuomo's executive order limiting the size of a congregation for in-person services at Catholic churches and other houses of worship.

The diocese's filing complains that the order "expressly singles out 'houses of worship' by that name for adverse treatment relative to secular businesses."

"People long to see each other in person," said Jacqueline Rivers, a Harvard University lecturer who participated in Becket's panel discussion of the findings. They're "willing to meet in socially distanced ways," such as outdoor services, but still long for essential human contact.

A majority of respondents said "religious freedom is essentially public in nature, and extends outside the walls of the home," said Caleb Lyman, Becket's research director. Especially in reopenings, respondents wanted religion "to at least get a fair shake from the government," he said.

In other findings, 80% of respondents agreed that religious communities should have a role in administering racial justice, but only half said their communities did a good job at it.

"Highly religious" respondents -- those who said they attended religious service at least once a month or more frequently -- "were more likely than average to say that the government treated congregations unfairly."

"Respondents indicated that when voting, religious freedom stances are a high priority; yet they don't think that elected officials did the best job of protecting religious freedom," the report states.

An executive summary of the report said it found three themes emerging from the findings:

-- That "Americans weather storms anchored by faith: Americans are anchored in their opinions on religious freedom, just as religion sustains them through difficult times."

-- That "religious identity cannot be quarantined: Religion is part of who Americans are, not just something they do. Respondents support protections that reflect the reality of religious identity."

The online survey of about 1,000 adults was conducted before the Nov. 3 presidential election for the Becket Fund by Heart and Mind Strategies, a firm based in Reston, Virginia.

Editor's Note: The findings of the Religious Freedom Index Report can be found online at https://bit.ly/32VDVKn.