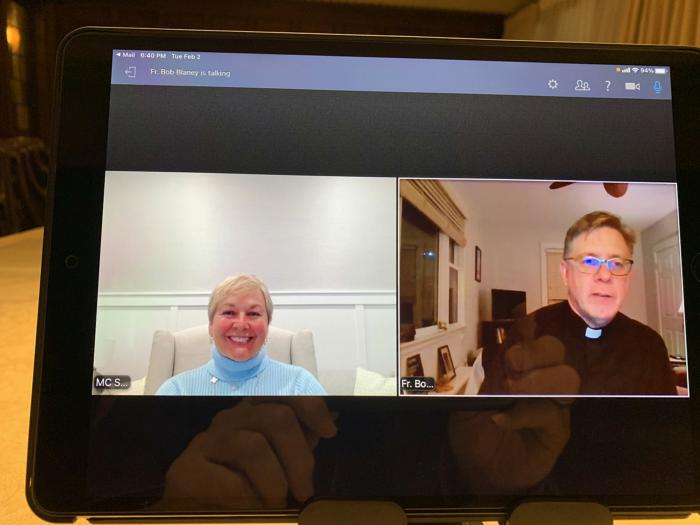 On Tuesday, Feb. 2, Cardinal O'Malley and MC Sullivan joined the deacon community of the archdiocese for a virtual gathering to share updates on the coronavirus pandemic and public health circumstances. Pilot photo/CardinalSeansBlog.org

Friday was the day that we marked the 48th anniversary of Roe vs. Wade with the virtual March for Life, which was preceded by the Vigil Mass for Life the evening before at the National Basilica of the Shrine of the Immaculate Conception in Washington, D.C.

Ordinarily, following the vigil Mass, there would be an all-night vigil with the different seminary groups at the shrine, ending at 8 a.m. on the day of the march with a closing Mass. Of course, this year, realizing the difficulties of gathering people in Washington, we knew the vigil would have to be celebrated virtually. As a member of the bishops' Committee for Pro-Life Activities, I had suggested that we might invite dioceses from around the country to host a different hour of the all-night vigil.

Here in Boston, we were asked to host the concluding hour of the vigil -- 7 to 8 a.m. -- on the morning of the virtual March for Life.

We had invited our seminarians from St. John's Seminary and Mother Olga and the Daughters of Mary of Nazareth to join us, along with Marianne and Henry Luthin, for a virtual holy hour that was carried on the CatholicTV Network and also live-streamed on the Internet. Unfortunately, because of the quarantine, we were not able to have the seminarians present, but we were very glad that everyone else was able to be present.

During the holy hour, we were blessed to have a beautiful witness talk by Dr. Kerry Pound, a pediatrician, mother of four, and a board member of Massachusetts Citizens for Life. She gave a very inspiring testimony.

Then, at 11 a.m., we had a Mass of Thanksgiving for the Gift of Human Life, which was also broadcast from the cathedral on CatholicTV and online.

We were pleased to be joined by the students from St. Paul's Choir School in Cambridge for the Mass.

We are very grateful for the many people who joined us through CatholicTV and online, as we prayed with Catholics from all over the nation that the culture of life may be advanced.

On Tuesday, MC Sullivan and I joined the deacon community of the archdiocese for a virtual gathering to share updates on the coronavirus pandemic and public health circumstances.

We were welcomed by the director of our permanent diaconate program, Deacon Chris Connelly, after which I made opening remarks.

It was an opportunity to thank our deacons for the ministry that they are carrying out, under the safety protocols and by virtual means, reaching out to those whom they serve. We particularly wanted to thank Deacons Paul Pridemore and Tom O'Shea for their service on the archdiocese's COVID Task Force.

As regular readers know, I like to gather several times a year with the recently ordained priests of the archdiocese. Normally, at this time of year, we would have gone for a day of recollection at the Campion Center in Weston. However, this year, we held our gathering online, during which I gave them a conference on the Beatitudes.

We are so grateful for all the work that Father Bob Blaney does with ongoing formation. I always enjoy these opportunities to pray together with our recently ordained priests and reflect on our vocation as priests.