CLEVELAND (CNS) -- Pope Francis' repeated calls for mercy and for the church to hear voices from the peripheries is an invitation to accept that the Holy Spirit speaks not just to church leaders but to all the baptized, Cardinal Joseph W. Tobin of Newark, New Jersey, said in an online lecture.

Those calls are the hallmark of the pope's efforts to change the life of the church, the cardinal said May 4 in his talk, "Synodality and the Long Game of Pope Francis," for the annual Cardinal Bernardin Common Cause Lecture at Loyola University Chicago's Hank Center for the Catholic Intellectual Heritage.

To bring about that change, the pope has focused on synodality as the path forward, influenced by his experience as a church leader in Argentina, he explained.

"One way we can look at this is that the election of Pope Francis opened up the rest of the world to the rich theological foment of the church in Latin America, with its strong sense of mission, encounter, the peripheries and mercy. And many, including church leaders in this country, have found that shift to be uncomfortable," Cardinal Tobin said.

"They shouldn't because it didn't start with Francis and I believe it's not going away anytime soon," he added.

The path toward synodality, the cardinal continued, will require the church to undergo its own conversion, "a new way of understanding and approaching how we carry out our mission."

He said the pope has devoted his papacy toward seeking a church that walks with others on a long journey into the world as the body of Christ, "a journey that fosters ongoing conversion and ultimately calls us to mercy."

"(We are) disciples journeying together, companions on the journey who are to be of mutual service to one another, people walking in history toward fulfillment of the kingdom, walking together with Christ," he said.

Cardinal Tobin recalled that it was St. John XXIII who set the course toward becoming a church of mercy by calling together the Second Vatican Council and, in his opening address, urging participants to serve as "medicine of mercy" rather than "a spirit of severity."

Seeing the need for a merciful response to years of human suffering in the first half of the 20th century, St. John XXIII discerned that the church had to be intentional in its witness and "create a blueprinting for the engine to power the church" into its third millennium, he said.

Vatican II produced that blueprint, Cardinal Tobin said, but noted that other popes continued the work. He said St. John Paul II made sure it "kept to the exact specifications required" and Pope Benedict XVI put the finishing touches on the propulsion engine "and now Pope Francis has flipped the switch to on."

Describing how Pope Francis "is revving up the engine to see what it can do," Cardinal Tobin said those who feel most threatened by including those on the peripheries in the life of the church are those "with the most engineered grasp of all the norms and canons (of church law)."

"To this I would posit, you can be the most knowledgeable mechanic on earth and still be a rotten driver," Cardinal Tobin said.

Synodality, he said, requires that voices throughout the church are welcomed and heard.

The cardinal again turned to St. John XXIII, recalling how he urged Vatican II's participants to "open the window."

"We always associated this with letting in fresh air," Cardinal Tobin said. "But something else happens when you open a window. You can hear what the people outside, those below your window, are saying.

Such openness is at the root of synodality that Pope Francis seeks for the church, he said.

"Ideally, a synodal environment should give us a living snapshot of where the Holy Spirit is active in the church or an ecclesial cardiogram, if you will," he said.

Hearing from people who have not always been heard "can soften our hearts and give us bishops the confidence to know that yes, that new thing that we are discerning is a movement of the Holy Spirit because the people hear it also."

It's not just the church leaders who have all the answers, he noted, suggesting that the integration of all parts of the body of Christ is key to achieving true synodality.

"Imagine a body in which the outer extremities are cold and gray," he said. "The heart may be beating but the life force is not reaching the extremities."

In response to a question from a viewer after the lecture, Cardinal Tobin said he expects laypeople will be part of that planned 2022 Synod of Bishops that will look at synodality.

"I think the synod is going to have a different look coming up, and there's going to be a forum where laypeople and ordained members will be together in preparation for the final stages of the synod," he said.

"If we're going to be consistent with the gift of the Holy Spirit that's given at baptism and also recognize the diversity in the body of Christ that we are different members but a single body, then we have to reimagine how synods are going to take place," he said.

"In reimagining," he added, "I think there's going to be a new wineskin to hold the new wine." 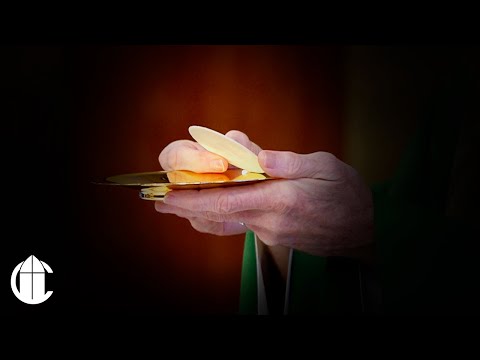