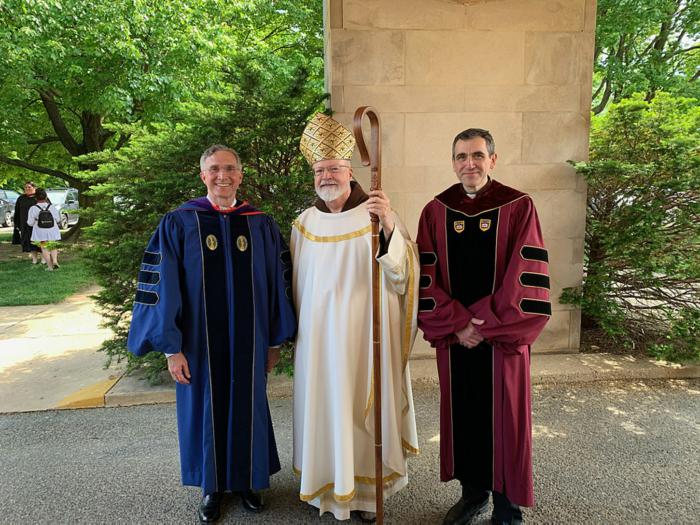 On Sunday, I was happy to join Ascension Parish in Sudbury for their Mother's Day morning Mass at Our Lady of Fatima Church. The readings of the day centered on love, so it was a beautiful theme for Mother's Day.

The pastor, Father Gerald Souza, is doing a wonderful job there. He noted that it had been 16 or 17 years since I sent him to the seminary, and he thanked me for my patience. I said that it just goes to show that you have to treat the seminarians very well because, one day, they'll be your pastors!

We had lovely weather that day, so I was able to be outside and greet the people after the Mass. It was nice to greet and congratulate all the mothers on their special day.

On Monday, I traveled to Washington, D.C., to celebrate the Baccalaureate Mass for the Pontifical John Paul II Institute, which was held the next day. It's been a year since I've been in Washington, and it was a great joy to be able to stay with the Capuchin community there.

I was happy to see they have a new resident -- a statue of Padre Pio!

It's always wonderful to be with the friars and enjoy their fraternity and the good example that they always give.

The Baccalaureate Mass on Tuesday was supposed to have been held at the John Paul II National Shrine, but because of pandemic restrictions, we held it at St. Bernadette's Parish in Silver Spring, Maryland.

There were about 30 concelebrating priests and a large congregation, including about 30 graduates representing the class of 2021 as well as the class of 2020, because they weren't able to have a commencement ceremony last year.

In my homily, I spoke a little bit about how I was present in Washington at the time when then-Fathers Carlo Caffarra and Angelo Scola were working with Father Lorenzo Albacete and Carl Anderson to establish the institute.

The Knights of Columbus have a special relationship with the John Paul II Institute. So, with us for the Mass was Supreme Knight Patrick Kelly.

The Supreme Knight presented me with a beautiful relic of Blessed Father McGivney.

I mentioned to Supreme Knight Kelly how beautiful the beatification ceremony for Father Solanus Casey was and that I am sure the ceremony for Blessed Father McGivney would have been just as grand if the Knights of Columbus could have come together for the celebration.

I am looking forward to the time when we can have a celebration at the Cathedral of the Holy Cross for our local Knights of Columbus and their families to celebrate Father McGivney's beatification. Of course, now, we will be able to have this beautiful relic of Father McGivney with us for that event.

Thursday afternoon, I took part in a Zoom meeting that was part of the ongoing follow-up to the V Encuentro. One bishop from each of the U.S. regions was invited to participate, and I represented Region I.

They were seeking the input of the bishops on some of the programs they are considering to promote lay ministry in the Hispanic community, particularly among young adults.