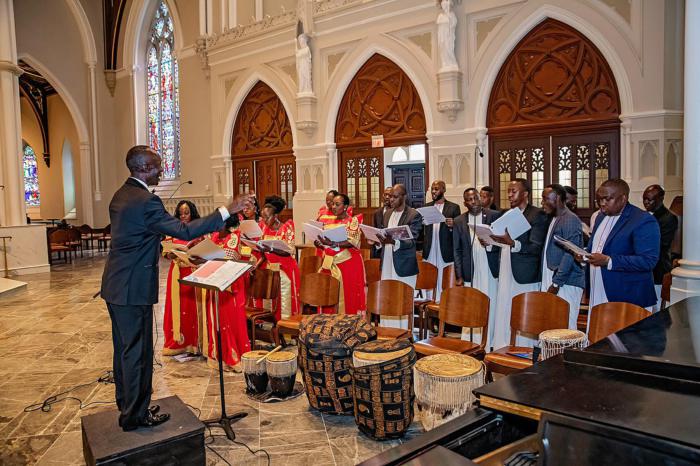 The choir, in their traditional Ugandan dress, sing for a special Mass to mark the feast of the Ugandan Martyrs. The celebration took place on the feast of Corpus Christi at the Cathedral of the Holy Cross. Pilot photo/CardinalSeansBlog.org

On Saturday, I was visited by the Capuchin Custos of Cape Verde, Father Antonio Fidalgo, who was accompanied by Father Claudino and Father John Curry.

For many decades, Capuchins from Cape Verde have worked in the Archdiocese of Boston, the most famous one being Father Pio from Torino, Italy. They have been an invaluable presence, helping us minister to the Cape Verdean community in Roxbury and Dorchester. Currently, there are two Cape Verdean friars working here, and we are hoping that they'll be able to send a third friar soon to help us in that mission.

Visit at the cathedral

That day, I was also visited at the cathedral by Father Roner Graterol from Venezuela, who belongs to the French order of the Sons of Mary Immaculate. They are planning to come to Boston, and he was here to conduct some of the initial meetings.

During our time together, we also spoke a little bit about the situation in Venezuela. He told me that when you are celebrating Mass in Venezuela, it's very common to have several people faint over the course of the Mass because they haven't eaten in two or three days. That really brought home the gravity of the situation there and the great difficulty that the people of Venezuela face.

Boston is home to one of the largest Ugandan communities in the United States. So, there has been a long tradition of celebrating a special Mass to mark the feast of the Ugandan Martyrs here in the archdiocese.

Normally, we invite bishops from Uganda to come and celebrate the Mass with the local Ugandan community at St. Mary's Parish in Waltham. However, because of the pandemic, we were unable to do that this year. So, they asked me to celebrate the Mass at the cathedral. They also decided to move the celebration to Sunday so that more people could attend, which made it coincide with the celebration of Corpus Christi. So, the Mass, the readings, and the sequence were all for Corpus Christi.

Of course, the choir was just superb, and it was wonderful to see them in their traditional dress.

It was the first time that many of the attendees had visited the cathedral, or at least seen it since the renovation. So that was another nice aspect of the celebration.

They had 22 men dressed in white tunics to represent the 22 Catholic martyrs. In some years, they have them all bring palm branches (I was very much looking forward to that), but this year they wore stoles, each with the name of a martyr. They also invited Anglican clergy who serve the Anglican Ugandan community to be with us for the Mass. Of course, the Ugandan Martyrs were both Catholic and Anglican -- 22 Catholics and 23 Anglicans were martyred together.

I reflected a bit about that in my homily, noting that Pope St. John Paul II, for the Jubilee Year 2000, established a committee to study the modern martyrs and establish the shrine at St. Bartholomew Church on the Tiber Island in Rome, where they commemorated all the martyrs of modern times. When he did this, the Holy Father wanted Protestants and those from the Eastern Churches included because he talked about "the ecumenism of blood" -- that through dying for the Christian faith, these people unite us in Christ. As a recent example of this, I pointed to the 21 Coptic Christian men who were martyred in Libya in 2015 by the Islamic State.