Gov. Mitt Romney receives applause from traditional marriage supporters at a Nov. 19 rally on the steps of the Massachusetts Statehouse. At the rally, speakers vowed to continue the fight to advance the proposed amendment to the state constitution that would restore the traditional definition of marriage in Massachusetts. The amendment effort suffered a setback Nov. 9 when the Legislature recessed its constitutional convention without voting on the measure. Pilot photo/Gregory L. Tracy

BOSTON -- Thousands rallied on the steps of the Statehouse Nov. 19 in support of the proposed amendment to the state constitution that would restore the traditional definition of marriage in Massachusetts. The rally was called after the Legislature recessed its constitutional convention without taking up the amendment on Nov. 9.

The crowd, which spilled down the Statehouse steps and across Beacon Street was estimated by Boston Police to number 5,000 people. While the vast majority were traditional marriage supporters, a group of same-sex marriage supporters stood at the rear of the crowd waving signs and chanting in opposition to the rally.

Addressing the crowd, Gov. Mitt Romney said that the 109 legislators who voted to recess the constitutional convention until Jan. 2, the last day of this legislative session, have rejected the law and violated their oath of office. The Massachusetts constitution clearly states that the Legislature “shall” vote on every qualified petition, he said.

“As I listened to the debate in the legislative session 10 days ago, I was struck by the irony and the hypocrisy,” he added. “Legislators so energized to protect the newly discovered ‘right’ to marry for some citizens had no compunction whatsoever about trampling the long established constitutional right of the people to vote.”

He promised to send the 109 legislators a copy of the state constitution and their oath of office on Nov. 20.

Romney said that he will take legal action if the lawmakers ignore the Marriage Amendment again. He will file suit, asking the Supreme Judicial Court to direct the secretary of state to put the amendment on the ballot if legislators refuse to vote, he said.

With the backdrop of a huge American flag, the rally had a distinctively patriotic tone, which included the singing of “God Bless America” and “The Battle Hymn of the Republic” as well as the Pledge of Allegiance.

Taking his turn at the podium, Kris Mineau, spokesman for VoteOnMarriage.org, said that he is a veteran who served in both Vietnam and the first Gulf War. He flew more than 100 combat missions, lost many close friends and was badly injured in the line of duty. He broke both of his arms and legs, spending six years in rehabilitation.

“I know what the cost of freedom is,” he said.

Roberto Miranda, chairman of VoteOnMarriage.org, said that the Legislature deceived the people of Massachusetts and have committed a “crass violation” of their rights.

“We were misled into thinking that if we followed the law and the constitution our legislators would do the same,” he said.

Instead, those legislators resorted to a “cowardly political maneuver” because they believed they could do so with impunity. They were also told by the homosexual lobby and Bay Windows, the newspaper of Boston’s gay and lesbian community, that they owed the homosexual community for its $1 million in campaign contributions, he said.

Unfortunately, said Miranda, the group that raises the most money often wins in American politics.

“But what should anger us the most is the sheer hypocrisy that has been displayed by the gay activists and their lobbyists. They portray themselves as victims, but in this case act as oppressors,” he said.

Behind the gay marriage front is an aggressive and politically sophisticated movement, he added.

“As we have already begun to see, the alliance between gay activists and legislators will be ruthlessly used to advance the homosexual agenda in our schools, our workplaces, the social service sector and eventually our homes and even our churches,” he said.

Linda Bertrand attended the rally, holding a sign that read, “This government of Lawyers, by Judges and for Special Interest Groups won’t let ME vote!”

Bertrand said the legislators must vote and uphold their oath of office. She also noted that same-sex marriage supporters present in opposition to the rally jeered while Mineau recounted his service to this country.

Father Bob Doherty, pastor at St. Mary Parish in Revere, agreed that Massachusetts citizens have the right to vote on the marriage amendment. Members of the Catholic Church must stand up for what they believe and what the Church teaches about marriage. Marriage is meant to be between a man and a woman who are open to having children, he said.

It is difficult but necessary to proclaim God’s truth with compassion, he added.

“You can’t just appease them by lying to them,” he said. 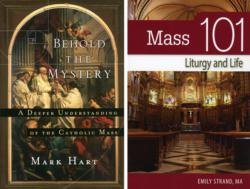