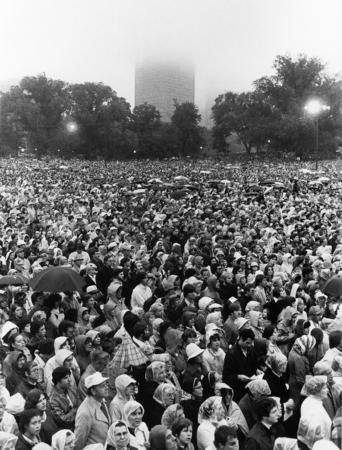 Boston faithful gathered in a rainy Boston Common, Oct. 1, 1979, for the city's first ever papal Mass during the visit of Pope St. John Paul II, which we commemorate 35 years later. Pilot file photo

Even as Bostonians hope for a visit to Boston from our current Holy Father, Pope Francis, many recall the visit of the only pope to visit Boston. Pope St. John Paul II visited the U.S. 35 years ago this week, making his first stop on his first pastoral visit to the United States, touching down in Boston on Oct. 1, 1979.

Arriving from Ireland aboard an Aer Lingus jet, the Holy Father was greeted by Boston's archbishop, Cardinal Humberto Medeiros and numerous other Church and civic leaders. The papal motorcade moved through the city's streets, through the North End across the city to the Cathedral of the Holy Cross where a special prayer service had been arranged for the priests of the archdiocese with the Holy Father. The packed church burst into thunderous and sustained applause when the pope arrived at its front doors on Washington Street.

An estimated crowd of 400,000 gathered for the Mass celebrated by the pope on the Boston Common.

The Archdiocesan Papal Choir had been rehearsing for weeks. Father (now Msgr.) Francis Strahan had not only directed and rehearsed the choir assembled from across the archdiocese, but had also composed music for the liturgy. Despite the at times torrential rain, the popes words of "I want to meet you and tell you all -- men and women of all creeds and ethnic origins, children and youth, fathers and mothers, the sick and the elderly -- that God loves you; that He has given you a dignity as human beings that is beyond compare" rand out throught the common, loud and clear.

In spite of the obstacles presented, the participation of the huge crowd at the Holy Father's Mass was respectful and orderly. Priests who distributed communion to the assembly on the common noted that even with the difficulty of getting to their stations there was generally a reverent spirit.

After the Mass the Holy Father went to the cardinal's residence, greeted on his arrival there by the Boston College Band. He dined with Cardinal Medeiros and the bishops of the area. He remained overnight at the residence, the first and only pope ever to do so. On the following morning he made a brief visit to St. John's Seminary and departed by helicopter for Logan and his trip to New York.