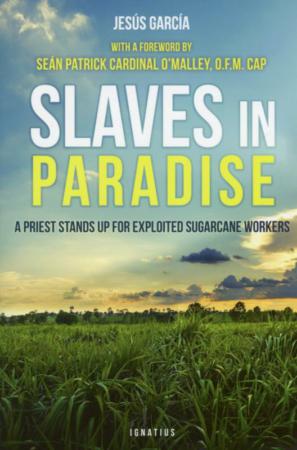 This is the cover of "Slaves in Paradise: A Priest Stands Up for Exploited Sugarcane Workers" by Jesus Garcia. The book is reviewed by Daniel S. Mulhall. (CNS)

Father Christopher Hartley Sartorius is a Spanish priest (English father, Spanish mother) from a well-off family. He decided to become a priest at age 15 and was ordained by St. John Paul II.

Father Hartley was greatly influenced by St. Teresa of Kolkata, and worked with her and the religious communities she founded on several occasions. His work with the Missionaries of Charity convinced him that he was called to be a missionary.

With the permission of the archbishop of Toledo, Spain, Father Hartley moved to the United States and was assigned to the Bronx borough of New York City, working with the Missionaries of Charity Fathers caring mostly for Puerto Ricans and Dominicans there. Soon New York Cardinal John J. O'Connor recognized Father Hartley's talents and sent him to study at the Pontifical Gregorian University in Rome, where he earned his doctorate in Christian dogma.

The story of Father Hartley's missionary work in the cane fields of the Dominican Republic is presented in the engaging book "Slaves in Paradise" by Jesus Garcia. Originally published in Spanish in 2012, the work has been recently translated and published in the U.S. by Ignatius Press.

Although Father Hartley's missionary years in the Dominican Republic were between 1997 and 2006, the story remains both challenging and compelling today.

Father Hartley is a very pious and devout person. He describes himself as being very traditional liturgically. His primary motive in serving in the Dominican Republic is to proclaim the Gospel of Jesus Christ, and to care for the religious and spiritual needs of the people in his parish, and that is how he begins his missionary service.

In his first few years in the Dominican Republic, he wrote a number of letters home to Spain to his family, friends and classmates telling them about the work he is doing in the missions and begging them to help him with prayers and financial support. His early letters focus primarily on his efforts to bring the Eucharist and other sacraments to all the people of his parish regardless of where they live or how rich or poor they might be.

Gradually, Father Hartley's letters begin to tell of the horrendous living conditions of those people who cut sugar cane. They are paid less than $3 a day for their labor, in a form of a voucher that can only be used at the company-owned store, which charges them 20 percent extra for using the vouchers. The cane cutters lived in dire poverty in thrown-together shacks with dirt floors, no sanitation and no running water.

While Father Hartley feels that everything he did was an extension of evangelization, his efforts to seek justice for the cane cutters led to his being relieved of his duties and being forced to leave the country abruptly in 2006.

Garcia, a journalist by trade, builds the book around the letters Father Hartley wrote to his benefactors, along with interviews with people who worked with him in the Dominican Republic. The English translation is excellent, the book easy to read.

That said, the plight of the cane cutters in the Dominican Republic is heart-rending: Be prepared to shed a few tears as you read, and feel compelled to do more to help the poor.