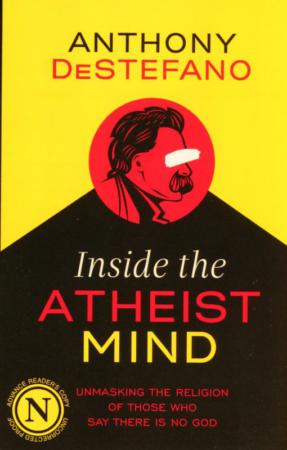 This is the cover of "Inside the Atheist Mind: Unmasking the Religion of Those Who Say There is No God" by Anthony DeStefano. The book is reviewed by Brian Welter. (CNS)

Readers of "Inside the Atheist Mind" expecting a tame rebuttal to atheists such as Christopher Hitchens, Sam Harris and Richard Dawkins are in for surprise.

Pulling no punches against disbelievers, Anthony DeStefano offers a clear, forceful and hopeful vision of faith while characterizing atheists as, among other things, arrogant, ignorant, ruthless and cowardly. He devotes each chapter to one such characteristic for close analysis of their logic and use of Christian history. The resulting clarity and consistency strengthen the argument.

Atheists are basically bullies, DeStefano says, who engage with the weakest parts of Christianity, such as fundamentalist beliefs in biblical inerrancy: "When atheists ridicule the book of Jonah as a moronic myth, they don't prove that the Bible is wrong, that believers are gullible, or that God doesn't exist. All they prove is that they are too shallow and slow-witted to understand more sophisticated ways of reading."

Atheists are cowardly, he says, for avoiding richer, more sophisticated ways of reading the Bible because these are harder to criticize. They misrepresent how most Christians actually understand and use the Bible.

The author strengthens his own argument by going deeper than this simple deconstruction. He points out the spirit and motivations of atheism revealed by their arguments. When discussing atheists' use of science's achievements against religious belief, he notes: "Their thinking is shallow. They use long, scientific descriptions to explain the mechanism by which they think life developed and then jump to the irrational conclusion that they have explained the cause of life itself. In philosophical terms, they confuse process with agency."

DeStefano follows a long line of Catholic thinkers, including St. John Paul II, in defining and highlighting the dangers of scientism. As DeStefano's above words indicate, scientism is the use of science for nonscientific ends. Using science to try to answer metaphysical or theological questions such as why we are here or whether the universe has a creator is unscientific because it rests on faith. Such speculation lies outside the boundaries of science.

In reality, atheists in fact do indeed have faith. "Atheists ... believe that life came from nonlife, consciousness came from nonconsciousness, and thought came from nonthought. Those are much more stupendous miracles than any of the Gospels report, but atheists won't concede they are miracles. ... Their faith is so restrictive that it doesn't allow for the slightest deviation from the doctrine of materialism."

The author argues convincingly that it is atheists who are inflexible and closed to any challenges to their entrenched perspective. He furthers this argument by referring to notable Christian scientists and other thinkers over the centuries for whom faith was not incidental but central to their scientific success.

Despite the strong language, the author does provide nuance when also getting to the heart of the matter. DeStefano strongly criticizes agnostics for refusing to make a decision on God, for it is this decision that holds the key to the Christian life.

Basing the Christian vocation on this decision has significant ramifications. This leads to strong criticism of "functional atheists," people who claim to be Christian but who really adhere to current secular standards. Refusing to make a clear decision, they try to have it both ways, belonging to the culture of death while claiming Christian faith. These functional atheists have provided an opening to atheists:

"If these believers practiced what they professed to believe," DeStefano writes, "the fruits of their faith would be so abundant that atheism could never gain any kind of foothold in society. ... It would be crowded out and suffocated" because "in the presence of truth, error always flees."

Christians can best confront atheism by examining the weak spots in their own faith, in other words. Since we have control over how we live our faith, this aspect of the argument is inspiring at a time when atheists always seem to be winning in the public arena. The author's strong faith makes "Inside the Atheist Mind" hopeful rather than whiny or defeatist.

DeStefano's strong, often sarcastic language may be off-putting to some readers expecting a more disciplined, polite theologian. Such informal language may also make "Inside the Atheist Mind" quickly dated. Yet apologetics must take many forms. Despite the sometimes grating language, this book will be appealing to readers tired of the common milquetoast Christian treatment of atheists.