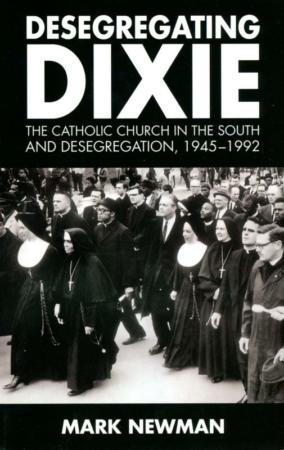 This is the cover of "Desegregating Dixie: The Catholic Church in the South and Desegregation, 1945-1992" by Mark Newman. The book is reviewed by Graham Yearley. (CNS)

"Desegregating Dixie" tells the story of the slow, hesitant desegregation of Catholic parishes and schools. The Catholic Church has always had a small presence in the American South compared to the Protestant denominations. The church never set up separate black and white parishes as the Protestants did in the days of Jim Crow. Nonetheless, the vast majority of Catholics worshipped as separately as Protestants.

Anti-Catholicism had been a virulent prejudice in the South. It was not on the same level as the prejudice against black people by whites, but it was strong enough to keep many bishops from pressing the issue of desegregation. Most white Catholics were as anti-desegregation as Protestant whites. Even the passing of the Brown ruling desegregating public schools did not lead Catholic bishops to comment on the issue.

Prejudice even existed between Catholic priests. White religious and diocesan priests who served in black-dominant parishes were looked down upon by other white priests serving white parishes, even when they had attended the seminary at the same time.

However, there were progressives among white Catholic priests and, interestingly, most of them were born and raised in the South. Progressive bishops in a few cases used their authority to punish priests and laity who refused to desegregate. But most progressives were not on the episcopal level and they could only work to persuade others at the local level.

As author Mark Newman points out, the Catholic Church as a hierarchical church could have desegregated schools and parishes at any time. But the authority in Rome did not seek to influence any movement toward desegregation. However, in 1943, in the midst of the Second World War, the Vatican did issue an encyclical on the church as the mystical body of Christ that encouraged priests and laity to work toward desegregation. Believing that the church was the mystical body of Christ meant that all, both black and white, were part of the church.

Some black Catholics left the church altogether, disgusted by their hesitancy. But others chose to stay and fight from within the church. Sadly, even today, in the second decade of the 21st century, most Catholics and Protestants worship largely in churches with people of their own race .The laws may change but moving individuals to change is much harder.

Yearley holds two degrees in theology from the Ecumenical Institute of St. Mary's Seminary and University in Baltimore.