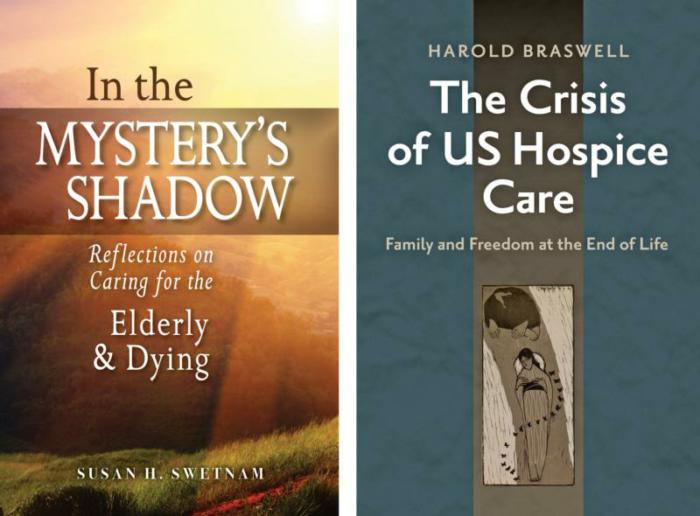 These are the covers of "In the Mystery's Shadow: Reflections on Caring for the Elderly & Dying" by Susan H. Swetnam and "The Crisis of U.S. Hospice Care: Family and Freedom at the End of Life" by Harold Braswell. The books are reviewed by Kathleen Finley. (CNS)

For many facing the death of a loved one, the hospice movement in the U. S. has been a tremendous resource in the last generation or two, with many families wishing in retrospect they had been connected with hospice services sooner. These two books offer us rather different and yet helpful perspectives on the important experience of hospice care for the dying.

"In the Mystery's Shadow" author Susan Swetnam offers us an up-close look at the care of those at the end of their lives. A former college English professor, she found herself in retirement learning massage therapy and working with those who were aging and dying. Her book is a gentle and thoughtful reflection for those working regularly with the aging or those experiencing this dynamic for the first time with a relative.

She is clear and specific, for example talking about the importance of respect: "A smile and a greeting offered to a stranger encountered by chance in the hallway of a nursing facility can improve mood, increase appetite and decrease anxiety. ... 'Spatial respect' is also desirable: sitting on the same level vs. towering over patients when speaking to them, offering a them a choice of seating if possible, providing services in a quiet, private setting."

When it comes to the observation often heard by those working with the dying that "I could never work with those who are going to die," she comments, "This is hardly the first time I've heard this sentiment, and as usual I resist the temptation to point out that everybody whose occupation involves dealing with human beings does exactly that all the time. Yes, sometimes it can be hard, I concede. But end-of-life care is nevertheless one of the most inspirational, uplifting things I've ever done."

And Swetnam explains well both the risk and the gift: "The nature of the work (of caregiving) means also that all such ministers will also sooner or later be invited to undertake challenging self-examination. Working with the suffering and the dying has a way of bringing out weaknesses and fears, venial self-protective tendencies, and character flaws. Caregivers will inevitably be brought -- perhaps as few other occupational groups are -- to acknowledge their common membership in the imperfect, sinning human race."

The second book takes a considerably different approach to the topic of hospice care, examining the more systemic issues of policy and politics as it impacts the hospice system.

The author, a professor of health care ethics, is exploring the topic professionally as well as personally, having cared for, as she was dying, the grandmother who raised him. His introduction is especially helpful, making a distinction between the role of the family at the end of life as love, at which it is skilled, and labor, at which it is not.

Braswell argues, "Our hospice system requires a level of familial caregiving that is beyond the abilities of most families in the country. The result is the systemic undermining of hospice delivery."

And again, "Inadequate familial caregiving at the end of life is not primarily a personal failure. It is, rather, a failure of the political structure of (this) country. ... The high percentage of services paid for by Medicare makes individual hospices dependent on Medicare certification. ... Medicare thus determines the ability of U.S. hospices to function and determines the kinds of caregiving that they can -- and cannot -- afford to provide."

He suggests that, rather than supporting family care for the dying, the current system depends on family care, to the detriment and lack of freedom of all.

"The system claims to support the dying family," he writes. "In reality, it keeps the family so busy managing the dying person's needs that it denies both them and dying people the ability to collectively mourn. This denial or mourning is a denial of freedom, the ultimate restriction of what the dying person can do."

At times this reviewer, whose contact with hospice is firsthand both as a volunteer and a family member during a recent death, had trouble following and agreeing with his arguments, but he argues for the expansion of hospice services so that as a culture we're more focused on the end of life instead of just its beginnings.

He also mentions Rose Hawthorne Lathrop and her community as an excellent model of compassionate caring for the dying. As Mother Mary Alphonsa, Rose was foundress of the Dominican Sisters of Hawthorne.

Whether or not an expansion of hospice services is in the near future, both these books give us plenty to consider as we and our loved ones approach the ultimate frontier of death with loving care and support.