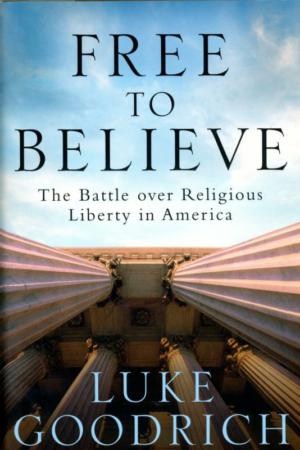 This is the cover of "Free to Believe: The Battle Over Religious Liberty in America" by Luke Goodrich. The book is reviewed by Eugene J. Fisher. (CNS)

Luke Goodrich is an attorney who has represented clients from various religions in cases involving questions of religious freedom. Some have gone to the Supreme Court. He has represented Catholic nuns who serve the elderly and the poor, and the Christian owners of Hobby Lobby.

His conviction is that people of all religions, and those who have no religious beliefs, are, as the Constitution declares, equal before the law. His record of legal victories in these cases is good, though he has not won them all.

In this easy-to-read book, Goodrich presents numerous key legal cases and perspectives that the layperson can easily understand, detailing how they were argued and how they were adjudicated.

Throughout, and deeply in chapter 12, Goodrich references sacred Scripture as a guiding light for Christians in understanding both American law and how Christians can and should be active within the legal system to protect their rights and the rights of all religious groups and individuals.

The first part spells out what Christians tend to understand and misunderstand and, how, with the proper understanding, they can persuade others to work toward full religious liberty for all Americans, believers and unbelievers.

The second part, the core of the book, asks whether Christians are "under attack" and whether what we often (mis)understand as "discrimination" is always "evil" (it is not), going deeply into court cases about abortion, gay rights and the rights of Muslims. Here "Muslim" stands for all religious minorities, from Catholics to Jews to Hindus to unbelievers. The final section -- "What Can Be Done?" -- brings together moral and legal challenges now facing Christian believers, relying on Scripture as a guide for us all.

I do have some problems. First, the author speaks of the United States as a "Judeo-Christian" nation. This in fact contradicts the central message of the book that all religions are equal before the law. Also, the term "Judeo-Christian" reduces Judaism to a mere adjective, with Christianity being the defining noun.

Judaism, based upon the divinely revealed Hebrew Scriptures, is a valid religion in its own right, not just a prelude to Christianity as the Catholic Church's official statements, beginning with the Second Vatican Council's "Nostra Aetate" (Declaration on the Relationship of the Church to Non-Christian Religions). Goodrich does not even reference the Vatican II document.

On p. 73, he states that the promise to Abraham (and Sarah, whom he omits) have been "fulfilled" in Christ and on p. 148 that "Jesus is the only way to God." This denies the ongoing validity of Judaism in its own right and, again, is contrary to official Catholic doctrine.

In terms of American law and history this book is very helpful, but Catholic readers should know that it presents views that contradict Catholic teaching on Jews and Judaism.