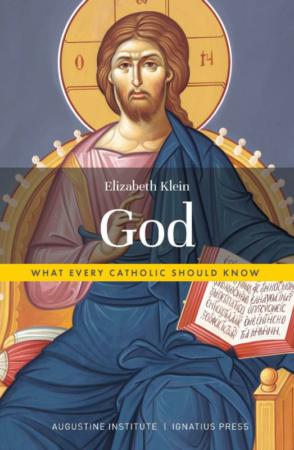 This is the cover of the book "God: What Every Catholic Should Know" by Elizabeth Klein. The book is reviewed by Kurt Jensen. (CNS)

You wouldn't think it possible to get the Almighty compacted into 142 pages, yet this is what Elizabeth Klein has done, without presumption.

"God" is the second book from the assistant professor of theology at the Augustine Institute in Denver -- her first was "Augustine's Theology of Angels" in 2018 -- and the third in the Ignatius Press series "What Every Catholic Should Know." The first two covered salvation and literature.

The result is a well-delivered lecture for the laity that doesn't simply cite the catechism and Scripture, but illuminates them as well. Klein isn't out to invent any radically new paths to knowledge, but instead cast reassuring explanations.

She knows she's tackling the seemingly impossible, so she explains the big picture thoroughly without side paths into arcane arguments. She's also extremely calm, which should be a huge benefit.

Klein knows God cannot be debated into existence, but can be explained to those whose hearts and minds are open, taking the view of St. Augustine that theology is "faith seeking understanding."

"Let us not be discouraged by the fact that God is beyond our complete knowing," she writes. But she knows what you're thinking from all those movie images, too. She prefers to begin with God's own description of himself in chapter 3 of Exodus: "I am who I am."

This, she writes, "immediately banishes any thought of God as an old man in the sky, for even the oldest of men would not have a name like this one."

Equipped with an understanding of "God's transcendence and immanence," she adds, "we can come to appreciate the magnificence of God and yet his nearness to all his creatures."

She brings in Sts. Paul, Anselm and Thomas Aquinas to support her explanations, and also Athanasius, the third-century bishop of Alexandria who laid the foundation for the Nicene Creed. Four of the book's 15 chapters are devoted to the mystery of the Trinity, which some may find a bit academic, but here, too, Klein reminds the reader to drop the concept of God as a person and instead embrace that his perfection "consist of complete relationality and love."

"The doctrine of the Trinity," she adds, "teaches us that God himself is the love that he gives."

In the chapter on God's suffering and death through the perfect sacrifice of Jesus Christ, she also reminds the reader, "God can appear overly transactional or exacting if we think of him as a heavenly accountant, demanding a payment that he knows we cannot make. Rather, the 'debt' owned to God is something that works only as an analogy."

God in heaven may be the most difficult concept to grasp, she writes, since "heaven in the modern world is often undersold," and to some, it may even seem "rather boring" as a picture of "some eternal version of the worst church service they have ever attended."

And that particular lack of "complete knowing" is difficult to put into words, Klein acknowledges: "Perhaps it can be hard to whet the appetite of those who think that heaven is no fun or that heaven is an endless chocolate bar."

She finally concedes that descriptions of what's called "the beatific vision" have been a challenge for centuries, quoting a 2008 homily on the feast of the Assumption of the Blessed Virgin Mary from Pope Benedict XVI: "Today's feast impels us to lift our gaze to heaven; not to a heaven consisting of abstract ideas or even an imaginary heaven created by art, but the heaven of true reality which is God himself."

Klein has produced a useful work that can direct readers to more detailed theological explanations in order to build their faith.