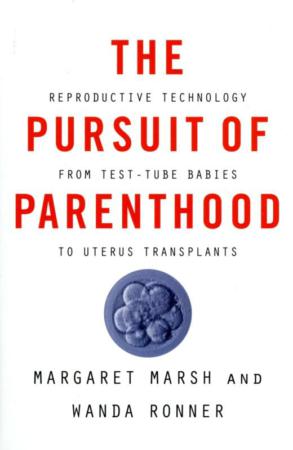 This is the book cover of "The Pursuit of Parenthood: Reproductive Technology from Test-Tube Babies to Uterus Transplants" by Margaret Marsh and Wanda Ronner. The book is reviewed by Patrick T. Brown. (CNS)

It might seem like another lifetime ago, but bioethical questions about the beginning of life used to regularly be topics of national discussion and controversy. Even as recently as the early 2000s, decisions on embryonic stem-cell funding merited a nationwide presidential address and was even the focus of the first veto wielded by President George W. Bush.

Since then, bioethics have fallen largely off the national radar screen, as culture war battles have focused more on questions of marriage definition than reproductive technologies and economic crises and populist movements took center stage politically.

But as Margaret Marsh and Wanda Ronner illustrate in their new book, "The Pursuit of Parenthood: Reproductive Technology from Test-Tube Babies to Uterus Transplants," the need for these conversations may be less visible now but may be more needed than ever. Familiarizing oneself with the history of their development does not require adopting the mindset of assisted reproduction proponents, but drives home the need to socially and legally address the intimate and delicate questions about what it means to be a parent and to seek a child at any cost.

Marsh and Ronner are sisters, one a historian and the other a gynecologist, who have written twice previously on conception or lack thereof. Their first book, "The Empty Cradle: Infertility in America from Colonial Times to the Present," was a thorough and compelling blend of clinical detail and historical storytelling, recounting the lengths that would-be parents go through in the attempts to have a biological child of their own.

This book is more tightly focused that that one, detailing the relatively short but profoundly influential history of the development of assisted-reproductive technologies. Their telling of the legal and cultural battles over this technology has profound lessons for those who would promote the common good in the political arena.

Marsh and Ronner recount the opposition to in vitro fertilization and other assisted-reproductive technologies as preventing the establishment of a U.S. regulatory framework, like the Human Fertilization and Embryology Authority in the United Kingdom. Because opponents were afraid of seeming to sanction some research by regulating it, it was left in an ambiguous gray area.

As the technologies became more accessible and culturally acceptable, it was too late to halt its expanse, and the U.S. is now an outlier in the tremendous degree it allows commercial interests to dictate the pace and direction of assistance in reproduction (America stands alone among developed nations in allowing paid gestational surrogates, for example.)

They rightly point out how advances in assisted reproduction subtly change the calculus around parenting and procreation -- making it more of a consumer good. The 2010 declaration from the Centers for Disease Control and Prevention typifies the conventional wisdom that infertility has become a "public health problem," with steps needed to expand access to treatments such as IVF, oocyte donation and preservation and gestational surrogacy. In this mindset, infertility is to be "solved" by procuring a child by other means, rather than by solving whatever medical issue may be causing the problem.

This attitude, of seeing a child as an guaranteed outcome rather than the welcome byproduct of a procreative and unitive act, flies in the face of a traditional Catholic view of sexual morality -- and indeed, Marsh and Ronner describe opponents of assisted-reproductive technologies as co-opting "the language of woman's rights to promote an anti-feminist agenda."

Their book would have been strengthened with a more comprehensive overview of the arguments against access to assisted-reproductive technologies, such as those proffered by donor-conceived children themselves (the website AnonymousUs.org collects stories from children and adults born through third-party reproduction, who often feel a sense of fatherlessness or motherlessness.) Readers interested in compelling arguments against the morality of these practices should look elsewhere, perhaps starting with Leon Kass' and James Wilson's "The Ethics of Human Cloning."

But even with this apparent blind spot, the authors still recognize the grave danger of exploitation in the current libertarian approach to the market of reproductive services and argue that a robust national conversation is needed again to build up a regulatory regime that curbs the worst abuses. For example, they frankly admit the horror stories of clinic technicians using their own biological material to inseminate dozens of unsuspecting women, but want to believe that those few bad apples can be identified and removed from the industry. If bioethics do not receive more attention, they predict, "we will unlikely be unable to tame the Wild West of reproductive medicine for another generation at least, and perhaps not ever."

William F. Buckley famously defined conservatism as "standing athwart history, yelling 'Stop!'" The genie of technologically-assisted reproduction may be too far out of the bottle for any amount of yelling. But the Catholic view of the inseparability of the marital act's procreative and unitive dimensions requires us to take a critical stance toward technology that would treat the buying and selling of reproductive material as any sort of market.

"The Pursuit of Parenthood" will inform the reader about the development of these technologies and may help to raise awareness of their more visible dangers. It should also act as an encouragement to Catholic bioethicists to develop a similarly readable history that outlines the limitations and dangers of a mindset that treats parents as consumers and children as products.