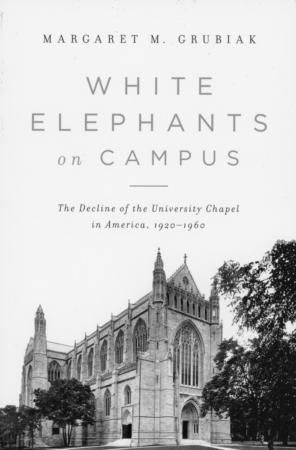 This is the cover of "White Elephants on Campus: The Decline of the University Chapel in America,1920-1960" by Margaret M. Grubiak. The book is reviewed by Brian T. Olszewski. (CNS)

During the mid-1990s, while my oldest son was shopping for a college, we toured Washington University in St. Louis. There in the heart of the campus was Graham Chapel -- a stately edifice that could have been a European cathedral. Our guide informed us that it was used for concerts, lectures and plays. She did not mention it being a site for prayer and worship.

Graham Chapel isn't mentioned in Margaret M. Grubiak's book, "White Elephants on Campus," but its contemporaries, including chapels at Princeton, Harvard, Yale and the University of Chicago, are as she provides readers with two history lessons. One is about religion's role on campuses of private, nondenominational U.S. universities; the other is about the architecture of these chapels.

She does both well as she explains how the chapel, as a structure and as an educational foundation, was a source of debate among administrators, educators, students and alumni as a religion versus science battle took place on campuses.

In taking readers to various campuses, Grubiak, an associate professor of architectural history at Villanova University, places them in the midst of the debates and the decisions regarding not only chapels, but also libraries and science labs. She explains the architectural styles of various structures -- explanations that might be a challenge to comprehend for those not versed in that field. But what is more important is her explanation of the significance of those structures, their locations, e.g., the Yale Divinity School being constructed nearly a mile from the campus center, and even their names, e.g., the University of Pittsburgh's library, the Cathedral of Learning.

Chapel as image was important. As Grubiak writes, "A new chapel among the new laboratories, libraries, lecture halls and dormitories signaled the university's commitment to religion even as it accommodated the needs of research and science. Conversely, the lack of a chapel seemed to suggest a negative posture on religion, even if this was the university's stated position."

In her epilogue, Grubiak raises three questions that transcend buildings' architectural merit and campus image. As they complete her examination of the white elephant, readers concerned about higher education and how it is forming young adults will want to consider:

-- How do institutions with a Christian past -- and Christian spaces -- alter their campuses to reflect identities in which Christianity no longer plays a central role?

-- How far do colleges and universities have to go to accommodate multiple beliefs and nonbelief?

-- What should you do with a chapel in changed times?

Important questions, for as Grubiak concludes, "Religious architecture on the campus has lost its real value in an era when religion, even defined beyond Christianity, no longer plays a central role in the formation and education of the American student."

Olszewski is general manager of the Catholic Herald, a publication serving the Catholic Church in southeastern Wisconsin.