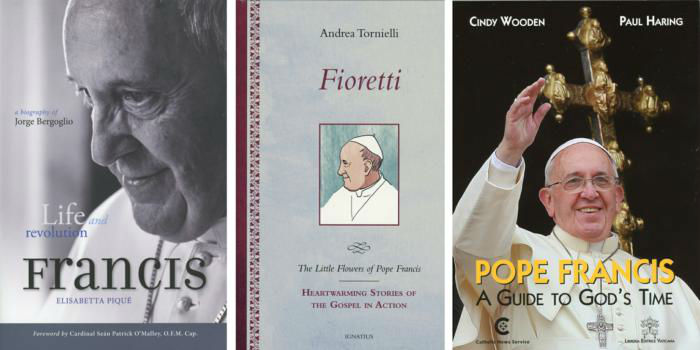 These are the covers of "Pope Francis: Life and Revolution" by Elisabetta Pique, "Fioretti: The Little Flowers of Pope Francis" by Andrea Tornielli and "Pope Francis: A Guide to God's TimeÃ by Cindy Wooden and Paul Haring. They are reviewed by Allan F. Wright. (CNS)

Elisabetta Pique, an internationally respected journalist, had an inside track into the lifestyle and manner of leadership Pope Francis exhibits because of her personal and familial relationship with him years before he was elected pope. Her friendship with the current pontiff began in 2001 when she was acquainted with then-Archbishop Bergoglio as a reporter for Argentina's main newspaper, La Nacion.

Pique's "Pope Francis: Life and Revolution: A Biography of Jorge Bergoglio" gives an insider's perspective into the man who would become pope. The author introduces you to "Padre Jorge" and allows you to walk with him through various stages of his life, putting you in St. Peter's Square as he is elected pope.

It is said that the Holy Father thinks like a Jesuit and acts like St. Francis and the reader can easily distinguish these similarities throughout her biography. The pope remains a poor man for the poor no matter the level of hierarchy he rises to, even the papacy, a man true to himself and to Jesus Christ whom he serves.

The most fascinating sections of this book deal with the inner workings of the Roman Curia and the challenges the pope faces in dealing with corruption. To those who view the Catholic Church through rose-colored glasses, the level of dishonesty and vice within the church and those who govern and lead will be shocking. Sex scandals, financial corruption and questions of a "gay mafia" are treated head on with full transparency.

(In July 2013, Pope Francis was asked about reports of a gay lobby at the Vatican protecting certain priests by threatening to blackmail others. According to a Catholic News Service report, the pope said he was aware of such reports but emphasized the need to "distinguish between a person who is gay and someone who makes a gay lobby. A gay lobby isn't good.")

The reader of Pique's book needs to be prepared for some sudden shifts as the author tells her compelling story of this man in short sequences and not always as a fluid documentary. Her friendship with Pope Francis provides insight to a simple, humble, strong and steady leader who would be the first to tell you that he is a sinner.

Andrea Tornielli's book, "Fioretti", offers inspiring stories, encounters and excerpts from the writings and talks of Pope Francis through his first year as pope. The title echoes the "Little Flowers of St. Francis," the famous collection of stories about St. Francis of Assisi, whose name the pope adopted for himself.

Cynics may decry Pope Francis' leadership style, his breaking with tradition, his speaking off the cuff so his words are misunderstood or mistranslated by the media. Yet his actions and love for Jesus, the poor and those who are forgotten cannot be mistaken. The personal stories of his desire to be treated not as a prince of the church but as a fellow disciple inspire and call the reader to reflection and conversion.

These stories hone in on spiritual and social themes which are important to Pope Francis and those which he has "put on flesh" during his pontificate. Mercy, forgiveness, charity, prayer, justice, the Eucharist, Our Lady and many more themes are examined through the words and writings of Francis and by the reflection of Tornielli.

"The Spirit of St. Francis: Inspiring Words from Pope Francis" is a collection of quotes from Pope Francis. In a short period of time, this shepherd who came from the ends of the earth has managed to transmit to us the joy of the Gospel through simple words and profound gestures that have moved many to take up their cross and to follow Jesus in simplicity. The book offers the words of Pope Francis as delivered in his Angelus addresses, daily homilies, general audiences and brief Tweets, containing messages that are uplifting, challenging and spiritual . An excellent book for those who desire inspiration for each day.

CNS Vatican correspondent Cindy Wooden and photographer Paul Haring have put together the words of Pope Francis with compelling photographs taken within the Holy Father's brief pontificate through which the reader can glimpse the heart of the man who leads the Catholic Church by word and deed. In "Pope Francis: A Guide to God's Time," the author provides an overview of the liturgical year and offers an introduction to the biblical themes Pope Francis sees as being most important.

This beautifully illustrated book offers more than just outstanding photographs for it delves into the heart of the good news which can be found in mercy, forgiveness, love and in an encounter with Jesus Christ.

Wright is author of five books on Scripture and is academic dean for evangelization in the Diocese of Paterson, New Jersey.