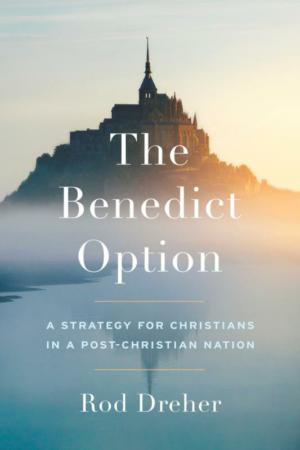 This is the cover of "The Benedict Option: A Strategy for Christians in a Post-Christian World" by Rod Dreher. The book is reviewed by Daniella Zsupan-Jerome. (CNS)

In "The Benedict Option," online journalist and social commentator Rod Dreher presents a salient question that resonates with many in Christian social-conservative circles: How should Christians assess and respond to the challenges of a post-Christian, secular culture?

His response is presenting a strategy called "the Benedict option," which he explains is a "call to undertaking the long and patient work of reclaiming the real world from the artifice, alienation and atomization of modern life." He roots the Benedict option in some aspects of Benedictine spirituality, and animates his exposition with a spirit of urgency, sounding the alarm for conservative Christians about the dangers of the liberal secular order.

For Dreher, engaging in culture wars is moot. Instead, he envisions this as a time for Christians to "save the seeds" of Christianity so that the future of the faith can survive.

Thinking through the lens of the monastic tradition, he promotes order, worship, work and a sense of community that is centered on Christ as infusing the ecclesial, domestic and social spheres of Christian life. He foresees this approach as responding to elements of our life today most infused by liberal secular ideology: education, work, sexuality, technology.

A strength of Dreher's work is his honest exploration of Benedictine values as more broadly applicable to faith and life today. This is a worthwhile exploration with or without the threat of the liberal secular order.

He approaches this tradition with respect and reverence, and his visit to Norcia frames a significant portion of his argument. A poignant detail in his conclusion is revisiting Norcia -- at least in spirit -- once more in the wake of the devastating 2016 earthquakes, which serves as a powerful metaphorical conclusion to his overall argument. How will the monks rise up once again from the rubble? With prayer, perseverance and stability of heart.

At the same time, several questions arise about his work. One is the lack of clear distinction between the ecclesial vs. the monastic paradigms when it comes to the domestic life of lay Christians. In the Catholic context we speak of the domestic church, but Dreher's preferred paradigm is more of a domestic monastery, or even "lay monastics." It would be helpful to think more carefully about this distinction, and the distinctiveness of monastic life vis-a-vis the lay state.

For Catholic readers, this is especially important as the laity is defined by having a secular nature and this is different from what characterizes the clergy and religious.

While it is certainly enriching to seek the wisdom of the Benedictines, it is important not to conflate the distinctiveness of the laity and religious in this regard. Perhaps another "option" is needed along these lines, possibly an investigation into lay (nonreligious) associations as another type of paradigm.

Another question arises in light of Dreher's seemingly implicit critique of established ecclesial structures -- the parish, the parochial school, catechesis and religious education -- as ineffective, coupled with an intentional look toward the invention of other kinds of associations and processes.

Again from a Catholic perspective, how we identify ourselves as community is above all creedal, liturgical and ecclesial. Does the Benedict option, a strategy for thinking about faith and culture, albeit a worthwhile conversation, have the same weight for shaping, defining and renaming who we are? Instead of re-identifying, perhaps reinvesting and reforming from within offers a more compelling witness in our broader cultural context.

Zsupan-Jerome is professor of pastoral theology at Notre Dame Seminary in New Orleans.