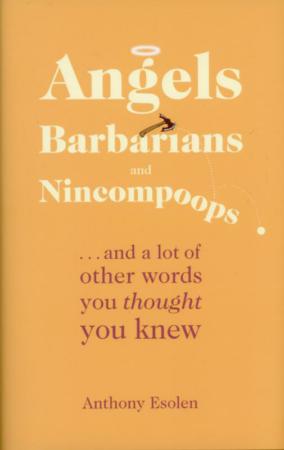 This is the cover of "Angels, Barbarians and Nincompoops: ... and a Lot of Other Words You Thought You Knew" by Anthony Esolen. The book is reviewed by Patrick T. Brown. (CNS)

If you're the type of person to ever wonder why the word "disgruntled" is commonplace, but calling someone "gruntled" decidedly less so, "Angels, Barbarians and Nincompoops" offers a rollicking ride through the forgotten histories of everyday words.

Beyond just casual etymology, however, the book hopes to inspire a broader love of language as something to be understood and employed, rather than simply taken for granted or abused.

Its author, Anthony Esolen, is a professor of literature at Thomas More College of Liberal Arts in Merrimack, New Hampshire, who recently left Providence College after attracting criticism for orthodox views forcefully expressed.

His prior book, "Out of the Ashes: Rebuilding American Culture," argued in part that the "cant" of modern language traps us in the empty buzzwords of a liquid, ever-changing modernity in which no truth can be pinned down and no true meaning ascertained.

While this thesis is not explicitly addressed in-depth in the lighthearted "Angels, Barbarians and Nincompoops," his rat-a-tat presentation can't hide his deep care for and appreciation of the original meaning and historical evolution of words and their use. Esolen might be seen as pushing back against the modern tendency to see language as a free-floating vessel, rather than part of a logical system of expressing thought.

"In our day," he fears, children are becoming "the tools of words rather than artisans who use them."

Esolen, whose acclaimed translation of Dante's "Divine Comedy" showed off his versatility in language, demonstrates familiarity with Old English, Italian, German, Latin, French and Greek in tracing how words evolve and change.

It's hard not to feel a little ping of grateful awareness to learn that "stupid" originally meant something close to "being stupefied," that "contrite" shares a root with "detritus," giving us the image of a penitent's sins being rubbed away into dust, or that "spaghetti" comes from the Italian for "little strings." As for the most evocative word in the title? "Nincompoop" comes from a delightfully mangled version of a Latin phrase familiar to "Law and Order" watchers, "non compos mentis."

These kind of word games run the gamut (a word, Esolen reveals, that comes from the Greek musical scale -- "gamma" to "ut") from genuinely enlightening to mildly amusing. From "buxom" to "pharmacy" to "virtue," every page takes off on a new romp through history -- including an affinity for mid-century pop culture, with citations of "Rocky and Bullwinkle," "Star Trek," "I Love Lucy," "The Munsters" and "The Beverly Hillbillies."

It's precisely this presumed familiarity that starts to grate; Esolen expects a friendly audience to indulge him in flights of fancy or editorial comments that aren't as consistently charming as he might intend. Saying we live "among the bombed-out ruins of what was once a great and good society" seems more like an escaped thought meant for "Out of the Ashes" than an educational romp through etymological history "tossed off in a spirit of play."

Just like a front-porch conversation with a well-read, comfortably ensconced raconteur, the book can be at times delightful and interminable, and is best consumed in comfortably sized doses. Laid out with no discernable order, it's easy to dip in and out of it "willy-nilly" (a phrase as old as Chaucer, we're told).

The fun in tracking down the hidden history of everyday words wears off after five or so words, so all the better to spread the enjoyment over a few weeks.

But does the discovery of old meanings and evolutions offer anything more than fun? Esolen believes that words can tell us about other languages, histories and modes of thinking. The project seemingly owes much of its philosophical grounding in Alasdair MacIntyre's observation that the fragmented moral universe of today's discourse is, at heart, rooted in the inadequacies and lack of embedded meaning in our common language.

Language unmoored from its cultural and historical underpinnings can be a cause for moral confusion and talking past each other, as we use words like "justice," "virtue" and "fairness" without understanding their original meaning.

Can a better understanding of the roots, translations and histories of common and uncommon words bring us closer to the angels and further from the barbarians? Perhaps. But even if Esolen's book doesn't succeed in that, it will make you feel like less of a nincompoop.

Brown is a graduate student at Princeton University's Woodrow Wilson School of Public and International Affairs.