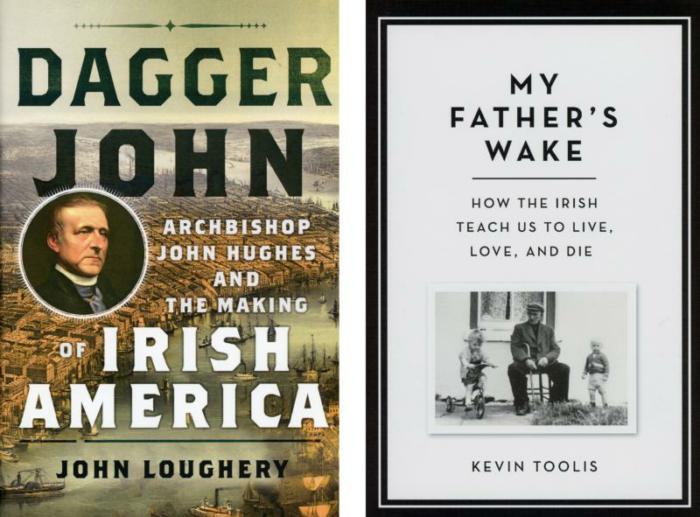 These are the covers of "Dagger John: Archbishop John Hughes and the Making of Irish America" by John Loughery, and "My Father's Wake: How the Irish Teach Us to Live, Love and Die" by Kevin Toolis. The books are reviewed by Kathleen Finley. (CNS)

Whether one's heritage is Irish or not, the inhabitants of the Emerald Isle continue to fascinate us. These two books offer a look at the past and the present, the gifts and the shadow side of the Irish and Celtic heritage.

John Loughery's thorough biography of Archbishop John Hughes presents an almost larger-than-life figure who was clearly influential as the Catholic Church was establishing itself in 19th-century New York and in American culture. In the face of frequently fierce hatred of both Catholics and the Irish, Hughes showed himself to be a quintessential Irishman: articulate, stubborn, combative and proud of his heritage and Catholic tradition.

Loughery shows Archbishop Hughes in his strengths and his weaknesses, as he faces down prejudice and a variety of challenges. He observes, "The task required more than intelligence, energy, faith and good will; it required bluster and defiance, disdain for obstacles, a propagandizing instinct, even at moments a crude and frightening but crowd-pleasing ferocity. The problem with the man who exhibits those qualities is that he is often the last person to know when the time has come to temper them and adopt others, quieter and more conciliatory, and Hughes was no exception to that truism."

Although he signed his name with a cross at the end, nonbelievers interpreted it to be a stiletto because of his fierceness, and the nickname "Dagger John" stuck from then on. Much like the current St. Patrick's Cathedral, which was begun by him but completed only later, there were many fruits of his labor that he was not to see in his lifetime.

Kevin Toolis' father Sonny was a much humbler sort of Irishman but shared his valuable Celtic heritage especially in death. In "My Father's Wake" Toolis takes us along as he explores his family origins on a remote island off the coast of Ireland and the customs there that have much to teach us about how death can be embraced.

Toolis explains: "Sonny was a very ordinary man and his life passed unnoticed by a wider world. But Sonny did have one advantage over most of us; he knew how to die. And he knew how to do that because his fathers and mothers on the island, wake after wake, had shown him how. They had trained Sonny all his life to die by giving a voice, a place, in their daily lives for the dying and the dead. And in showing Sonny how to die, those Irish fathers and mothers taught him other more important lessons. How to live. And how to love."

Toolis is critical indeed of what he calls the "Western death machine" and instead shows us the whole village visiting his father before and after his death, his body being prepared by his relatives and a far more open attitude toward death than we experience in this country and than some readers may be comfortable with.

The open and communal attitudes toward death he and we encounter are actually far more common in the world today and throughout history, and they have, he suggests, a radical possibility within them. "If we can recognize each other as in some way equal at the grave, perhaps we can then, too, in other places, also see each other as the same creatures who have wants and needs and desires like our own. And so have more understanding of both our and their own frailties, and no longer divide ourselves into defining categories like rich or poor, city or islander, strong or weak, clever or stupid, but just human. All too human. Like us."

Toolis' explorations of death approach the poetic at times and invite plenty of reflection. He ends by wishing us: "May you too find in death the same grace I found in my father's wake."

Finley is the author of several books on practical spirituality, including "Savoring God: Prayers for the Newly Married" and "The Liturgy of Motherhood: Moments of Grace." She previously taught in the religious studies department at Gonzaga University in Spokane, Washington.