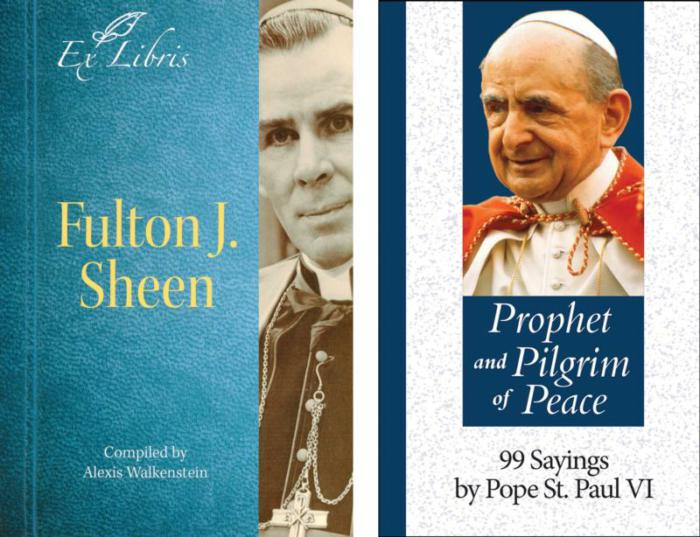 These are the covers of "Prophet and Pilgrim of Peace: 99 Sayings by Pope St. Paul VI," edited by Karl A. Schultz, and "Fulton J. Sheen" by Alexis Walkenstein. The books are reviewed by Brian T. Olszewski. (CNS)

Aside from his 1965 speech to the United Nations in which he said, "Never again war, never again war! It is peace, peace that has to guide the destiny of the nations of all mankind," and his 1972 Day of Peace letter in which he wrote, "If you want peace, work for justice," rarely does one read or hear a quote from the recently canonized St. Paul VI.

That's too bad. While his writings and speeches were not as extensive as the aforementioned popes, what he wrote/spoke provided much upon which to reflect.

In "Prophet and Pilgrim of Peace," readers will find plenty of material that can be integrated into one's prayer life or that simply offers inspiration for the day.

It is no surprise that three of the quotes chosen by Karl A. Schultz are about evangelization as St. Paul VI's 1975 apostolic exhortation on evangelization, "Evangelii Nuntiandi," is viewed by many as the root of the new evangelization that continues to be an integral part of his successors' pontificates.

In collections of quotes, one can recognize the prophetic in the subject when a quote is as relevant today as it was when first written. Such is the case with Schultz's inclusion of this one from the 1964 encyclical "Ecclesiam Suam" ("Paths of the Church"): "We must serve the church and love her as she is, with a clear understanding of history, and humbly searching for the will of God who assists and guides her even when at times he permits human weakness to eclipse the purity of her features and the beauty of her action."

While the material is rich, the editor did not provide the source for each quote. Rather, the book includes a list of sources, i.e., encyclicals, apostolic exhortations, apostolic letters, etc., from which the material is culled, but not a specific reference for each quote. Readers wishing to read St. Paul VI's words in context must Google them to find the source from which they came.

Like St. Teresa of Kolkata, Father Henri Nouwen and Father Thomas Merton, the life of Archbishop Fulton J. Sheen and his writing continue to inspire. Having read the archbishop's "Three to Get Married," Alexis Walkenstein was inspired to learn more about the television legend with whom she claims a "spiritual friendship."

Her 12-page introduction indicates she has a spiritual love affair with Archbishop Sheen as she explains how she came to know him through his writings and his family members. She serves on the advisory board for the canonization cause for Archbishop Sheen, who has been declared "venerable," which is a step in the cause recognizing his heroic virtues.

The result is a volume of selections from "Three to Get Married" and six other Archbishop Sheen books. What Walkenstein provides is a buffet of the archbishop's work, covering topics as diverse as "Invasion of Divinity" and "The Mystery of Sex." It will not take readers long -- especially those who have only heard their grandparents talk about watching him on TV in the 1950s -- to understand why he is a venerated prelate.

Walkenstein concludes with a chapter titled "Continuing in the School of Fulton J. Sheen," in which she provides readers with six questions about what they have read. The questions are helpful for those wanting to use his words as a source for prayer, meditation and how to live their lives.