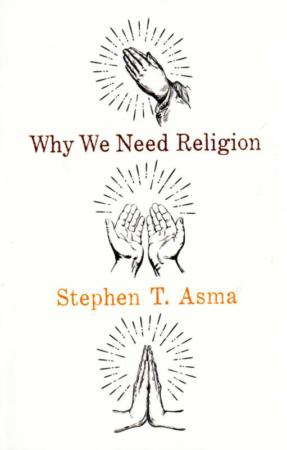 This is the book cover of "Why We Need Religion" by Stephen T. Asma. The book is reviewed by David Gibson. (CNS)

Stephen Asma once was a Catholic altar boy. Today he calls himself an agnostic. He confesses he prayed when his son "was in the emergency room with an illness" but did not believe that prayer would help to heal him.

"I, too, get religious" in the face of "insurmountable troubles," Asma writes.

Asma, a philosophy professor at Columbia College in downtown Chicago, offers this new volume, "Why We Need Religion," as an "appreciation." To be sure, his appreciation of religion -- or religions -- will prove unpredictable and possibly off-putting to many practicing religious believers. It is a real, but hardly typical, appreciation.

Unlike many who write on religion, Asma does not aim to guide readers toward greater personal faith or to enrich their relationship with God. Indeed, for example, he does not view "communication with the divine" as prayer's "true function." What some may find surprising is that he thinks praying has any worth at all.

He locates the major functions of prayer in its capacity to help people achieve "peace of mind or equanimity" and foster resilience. In his thinking, this hardly is insignificant.

Asma comments, "We don't have to go off to live in a hut in order to get inner peace," though "we do have to explicitly cultivate greater peace of mind. Religion provides structures that foster such cultivation."

That observation hints at the wide variety of reasons this author holds that religion remains needed in our world's societies. Asma may look in on religion from the outside, so to speak, but he does not seem set upon re-creating religious believers in his own image.

Nor does Asma interpret religion as an opiate of the masses or a force that drains human beings of their unique vitality, as some critics of religion might hold. His most basic point is that "religion helps people, rightly or wrongly, manage their emotional lives."

"Why We Need Religion," he explains, "is not just a defense of religion on the grounds that it comforts," though it "has this function." Instead, religion has a "larger therapeutic mission ... to manage the emotional life."

Religion should not be understood primarily in large-scale, institutional terms, "although it has such manifestations," he says. Rather, "it is a proximate set of stories and rituals that sculpt emotions into habitual value patterns."

The author advances this line of thought through explorations of basic themes in human life such as death and grief, fear, forgiveness or joy. One unique aspect of religion "is the way it encourages joy amidst the hardships of life," he observes.

He acknowledges that "yes, for Christians the suffering of this life will be compensated in the next life." However, he adds, "the daily teaching and consolation of religion -- its stronger attraction -- is to find some joy in today or in this week."

Religion, he observes, "is particularly good at fostering ... feelings and actions that can improve" an individual's vitality, as well as "the cooperation of larger groups."

Asma also advances his basic theme by exploring the dynamics of forgiveness. "Religious forgiveness is one of the many cultural mechanisms that help us manage or regulate our emotional lives," he states. Religion fulfills a "helpful" role not only in the lives of individuals, but in marriage and family life, for example, by "inspiring, reminding and facilitating the difficult work of forgiveness."

Asma points to certain "extreme cases" in life when "forgiving your wrongdoer is the only way to rejoin the world and stop the slide into dysfunction."

His exploration of religion and forgiveness cites the father of the wayward prodigal son in the Gospel of Luke as "a model, an exemplar or archetype," who "shows us the way to do it." The author comments, "We need prototype characters to show us how to achieve such emotional transformation. And religion provides those prototypes."

"Why We Need Religion" is a collection of detailed chapters on the worth of religion. Be prepared to be confronted in these pages by an avalanche of information that approaches world religions from a myriad of perspectives.

In fact, at various points the book starts to sound just a bit like a work of comparative religion. The author's ability in these times of globalization to promote awareness of world religions -- whether Christianity, Buddhism, Islam, Judaism or others -- came across to me as one of his best strengths.