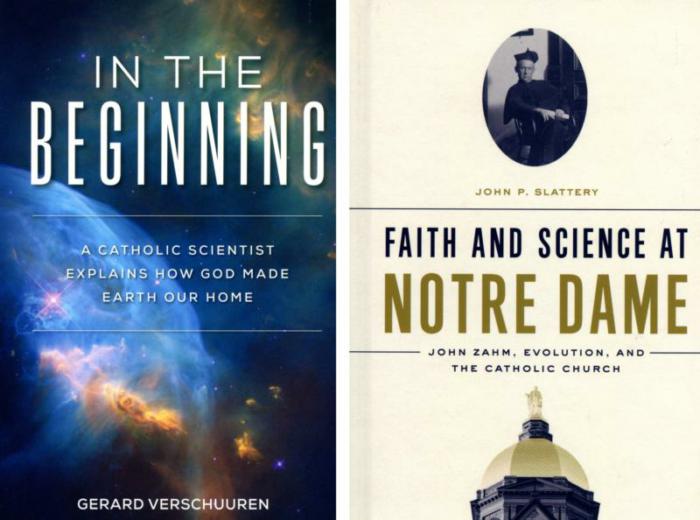 These are the covers of "In the Beginning: A Catholic Scientist Explains How God Made Earth Our Home" by Gerard Verschuuren and "Faith and Science at Notre Dame: John Zahm, Evolution and the Catholic Church" by John P. Slattery. The books are reviewed by Timothy Walch. (CNS)

"In the Beginning: A Catholic Scientist Explains How God Made Earth Our Home" by Gerard Verschuuren. Sophia Institute Press (Manchester, New Hampshire, 2019). 192 pp., $18.95.

There's an old adage that one shouldn't discuss religion or politics in polite company. The same could be said about science and religion. There seems to be no end to the clashes between the creationists and scientists over the existence of God as manifested in the history of the universe.

This is not to say that there's a dichotomy between faith and science. Many scientists firmly believe that there is an order in the cosmos that points to a divine plan. Albert Einstein put it succinctly when he pointed to the natural world as evidence for his own belief in God. "He does not play dice," Einstein wrote in 1926.

Two new books -- one historical, the other teleological -- are efforts to inform and expand our knowledge of God's presence in our universe. Both books begin with an a priori belief in the existence of God and build upon that belief. Both books show how people of faith could deepen that belief through scientific inquiry.

In "Faith and Science at Notre Dame," John P. Slattery focuses on the tenure at the University of Notre Dame of Holy Cross Father John A. Zahm: priest, evolutionary biologist and vocal advocate for the compatibility of religious faith and scientific inquiry.

Without question, it was a bumpy ride. Zahm was a bright young man who arrived on campus in 1867 and became the keystone of the university's science department. In addition, he developed into an articulate -- even evangelical -- advocate for the growing importance of scientific exploration.

Father Zahm's rise to prominence culminated in the publication of his book "Evolution and Dogma" in 1896. It was an exceptional work but one that brought him into controversy with the Vatican. It was only through complicated negotiations between Father Zahm's superiors and Vatican officials that the embarrassment of having the book censured was avoided.

The aftermath of the controversy led to troubles within his religious order. After losing an election as provincial in 1898, Father Zahm left Notre Dame and began an odyssey of travel, research and writing. He never again returned to university teaching or administration.

Father Zahm's life story is a cautionary tale of the challenge that men of faith face as scientists. This also is the implicit message of Gerard Verschuuren's latest book, "In the Beginning: A Catholic Scientist Explains How God Made Earth Our Home." The subtitle is bold evidence of Verschuuren's point of view.

More specifically, Verschuuren has written this book for nonspecialists to offer a road map for the differences, distinctions and harmonies between science and religion. He divides the topic into readable chapters -- many of them in the form of common questions. The first chapter, for example, is titled simply, "Creation or Big Bang?" The appendix addresses "Is the Planet Earth Unique?"

It is important to note that Verschuuren, like Father Zahm before him, is comfortable in both the worlds of science and theology. In fact, his abilities and achievements as a philosopher of science underscore the value of this book. As he notes here and in other works, there is no conflict between science and religion as long as both fields stay within their own areas of expertise. Restated, science is not a "pseudo-religion" and religion is not a "semi- science."

Neither Father Zahm nor Verschuuren offer all the answers to the complex relationship between religious faith and scientific inquiry. They do, however, help us to ask better questions. That bit of humility and wisdom makes these books valuable additions to any reading list for 2020.

Walch is a historian of American Catholicism and the author of "Parish School" (2016).