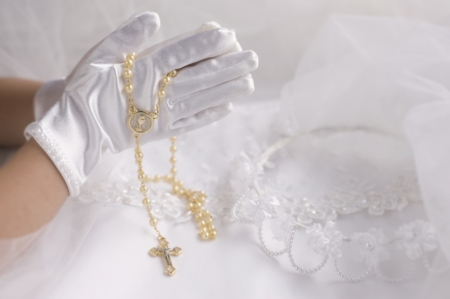 BRAINTREE -- A child's first Communion is a special day for any family and a number of parishes are working to make sure financial hardship doesn't stand in the way of it being as special as it can be.

A number of parishes of the Archdiocese of Boston accept donated apparel -- lightly-used white dresses and boy's suits -- for families of first communicants who are in need.

"We have a lot of families unemployed or struggling, so we want them to have the same thing we'd expect for our children on their first Holy Communion," said Heather Hannaway, director of religious education at St. Mary Parish in Chelmsford.

Already the parish has received a number of donations for this year's first Communions.

Hannaway said her parish typically asks for "slightly used" clothing, but this year the parish received three complete sets of new outfits for girls and boys. She said the anonymous donor brought in three dresses, three veils, three shirts and ties and three blazers, which she described as "all brand new out of J.C. Penney."

"It was just a very beautiful and touching donation to people he didn't even know," she said.

She said the donation of items for boys was especially rare and the parish has also received a monetary donation for shoes.

She credits the general increase in donations with the fact that last year the parish incorporated first Communions into the normal Sunday Masses instead of a separate Saturday morning celebration.

"The whole sense of it being a sacrament of initiation is taking hold," she noted.

"It was educating the community about sacraments of initiation and their gift to be a part of it," she said.

Already this year, Hannaway has had a request for first Communion outfits.

She said her parish typically collects 15 to 20 items per year.

Like Hannaway, Wilkinson has noted the increase in donated boys' suits, noting that suits are becoming harder to find or getting more expensive.

Wilkinson also said that the parish works with a cluster of nearby parishes if individuals from neighboring towns need first Communion clothes but their parish does not collect them.

Russo says the parish will help families from other parishes in Lynn, but last year donated items went to children in Haiti.

The parish donated church furnishings and liturgical vessels from the now-closed St. Patrick Church in Lynn to be used in a church located in Haiti. The donation included about 80 dresses, 30 to 40 suits, shoes and veils.