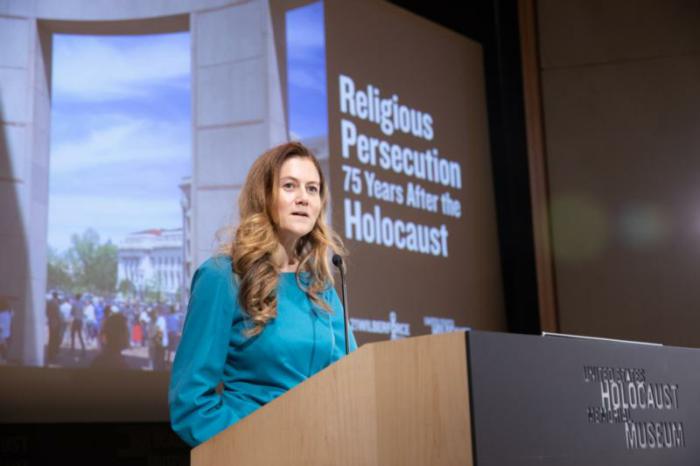 WASHINGTON (CNS) -- As the world recognizes the 75th anniversary of the liberation of the Nazis' infamous Auschwitz concentration camp, the vows of "never again" after the Holocaust's horrors became known threaten to be swallowed up by religious persecution against Christians, Muslims and other groups, said panelists at a Feb. 5 forum at the U.S. Holocaust Memorial Museum.

"The unthinkable is possible, and everyone must act," said Naomi Kikoler, director of the museum's Simon-Skjodt Center for the Prevention of Genocide and panel moderator.

Omer Kanat, chairman of the World Uyghur Congress' executive committee, said the crisis for Uighur Muslims began in 2017 as China's crackdown on the minority ethnic group intensified, calling the "eradication of Uighur culture" an "extermination."

There are 1.8 million to 3 million Uighurs in "concentration camps," Kanat said. "The statements of government officials are going in this direction: 'We cannot sustain the weeds among the crops. We have to spray a chemical, and kill all of them.'" He added not only are Uighurs within China traumatized by the ongoing repression, but Uighurs living outside China are despondent over "their inability to help their family back home."

Fu said the government requires Christian clergy to make faith matters secondary to "the indoctrination of communist Chinese ideology ... in their pulpit in the preaching before they are allowed to practice their religion."

Not only are Christians being marginalized, Fu asserted, but "Buddhist monks are forced to sing a Chinese national anthem in their monastery." He added, "These are the most challenging times for us now."

He urged people of faith to take to social media to help oppressed peoples. "Pay attention to the truth. Truth moves. Truth has power," Fu said. "One tweet a day! Today's tweet on the Uighurs, tomorrow's on the Yazidis." He also suggested churches invite representatives of persecuted people to speak to their congregations.

"Nobody cares what's really happening right now," complained Loay Mikhael, a senior Iraq adviser for Iraq Haven and a Chaldean Catholic. "Nobody's trying to do something tangible on the ground to bring their communities back." He added his hope that the United States will come to their assistance. "The United States has the power" and can put "people on the ground to see what needs to be done."

Mikhael, who is based in Washington, said his parents remained in Iraq, but he has siblings in Germany and Australia, hoping to forge a better future. Other Iraqis, not as lucky, make do in refugee camps that swelled once Islamic State began its genocidal acts in 2014. "Put yourself in their shoes for a week -- not five or 10 years. How can you live like that?" he asked.

Yasmin Ullah, research coordinator for the Free Rohingya Coalition, said Myanmar's oppression of Rohingya Muslims began in the 1980s, when the military asserted its control over the nation. As a child, she fled with her family into Thailand in 1995, decades before the state-committed atrocities forced hundreds of thousands of Rohingya to flee into camps in neighboring Bangladesh.

"Just imagine having to eat rice once a day, every day," Ullah said. "Imagine kids not wanting to go to sleep for fear that if they do, rats will eat away on the tips of their fingers. Imagine being crowded into something smaller than this (auditorium stage), not just you, but four or five of your family members."

Ullah said the Rohingya will have to think about the long term, because "how do we rehabilitate anyone in this destabilized environment?" She voiced her hope that the United States will come to the Rohingya's aid: "The United States is very well situated among world leaders," she said.

Aid to restore Yazidi life has been slow in coming, Ashur noted, saying people should take a critical eye when someone proclaims that aid is "on the way." He added 80% of Yazidis still live "in danger" with no job opportunities. "The ongoing struggle and protests in Baghdad (the Iraqi capital), that's not helping Yazidis because it takes attention away," he said.

Ashur's red flag: "If you see your neighbor or your fellow bystander being persecuted, you know that one day, it's going to happen to you."