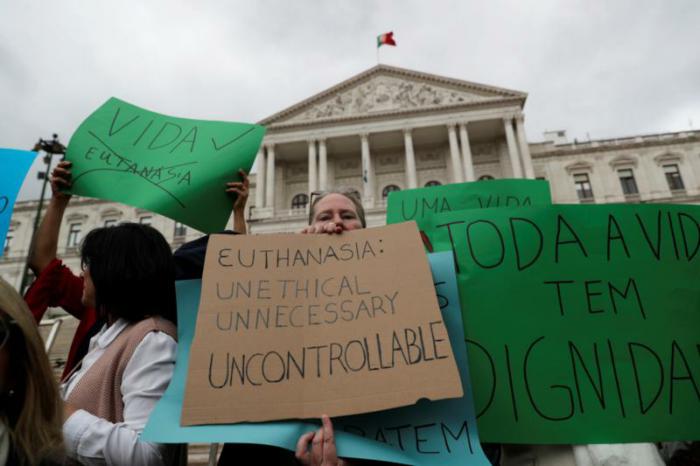 Demonstrators protest euthanasia in front of the parliament in Lisbon, Portugal, May 29, 2018. Portuguese and Spanish church leaders rejected plans to legalize euthanasia in their traditionally Catholic countries, and urged broad discussions of such proposals before they are considered by legislators. (CNS photo/Rafael Marchante, Reuters)

OXFORD, England (CNS) -- Spanish and Portuguese church leaders rejected plans to legalize euthanasia in their traditionally Catholic countries, and urged broad discussions of such proposals before they are considered by legislators.

"It's painful this law began its process when we were celebrating the World Day of the Sick," Auxiliary Bishop Luis Arguello of Valladolid, secretary general of the Spanish bishops' conference, told a forum Feb. 11.

"In welcoming human life in all circumstances, the church does not defend therapeutic cruelty in keeping life going mechanically at all costs. But solutions cannot lie in making the suffering person disappear," he said at the event organized by the Valladolid-based El Norte de Castilla daily.

The bishop's comments came as the Spanish parliament voted 208 to 140 to advance draft legislation by the government of Prime Minister Pedro Sanchez.

Retired Archbishop Braulio Rodriguez Plaza of Toledo, Spain, also argued that legalizing euthanasia would be a "serious and harmful sin" while rejecting claims it signified a "new human right" that could be decided by parliamentary majorities.

"Neither euthanasia nor assisted suicide will make society better or freer, or be an expression of true progress," he wrote in a Feb. 11 letter.

Establishing "new rights" to "a dignified death and regulated euthanasia" was pledged under a coalition agreement between Sanchez's Socialist Party and the far-left Unidas Podemos, whose joint coalition took office Jan. 13 with a two-seat majority in the 350-seat Cortes Generales.

The law as drafted would allow euthanasia within the state health care system for patients with incurable illnesses or chronic disabilities, and abolish a ban on assisted suicide.

A written request to die must be repeated after 15 days, without pressure, and be approved by a medical commission, with final provisions decided separately by Spain's 17 regions.

Spanish media said the measure was modeled on laws in Netherlands, Belgium and Luxembourg, which allow euthanasia alongside Canada, Colombia, Switzerland and parts of Australia and the United States.

However, 87% of citizens backed euthanasia rights for incurable patients in an April 2019 survey by the Metroscopia polling agency. Support was highest among young people.

Meanwhile, Catholic bishops in neighboring Portugal have backed a petition calling for a referendum on euthanasia, as similar legislation nears debate in the Lisbon parliament.

"The Catholic Church is joining this initiative of doctors and other faiths against decriminalizing euthanasia -- a referendum would be a useful means, in this situation, to defend life," Father Manuel Barbosa, spokesman for the Portuguese bishops' conference, told reporters Feb. 11 in Fatima.

"Society has to be consulted and heard on issues essential to life, and parliament's legitimacy lies in serving the people's common good," he said.

Legislation to legalize euthanasia was rejected by the Portuguese legislators in May 2019, but was resubmitted after October elections, in which the Socialist Party and Left Bloc increased their parliamentary presence at the expense of Social Democrats and Christian Democrats.

On Feb. 11, the Catholic Church supported demands by an interfaith working group of Catholic, Protestant, Orthodox and Adventist Christians, Muslims, Jews, Hindus and Buddhists for Portugal elected officials to consider "mistakes and ambiguities" in the proposed law.