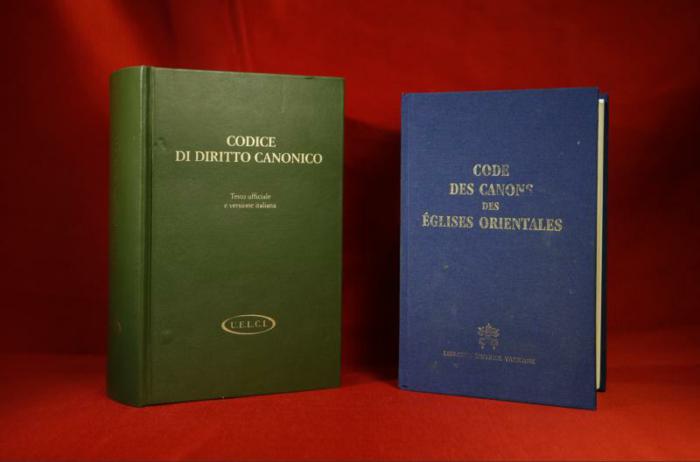 Code of Canon Law books for the Latin and Eastern Catholic churches are pictured in Rome at the Pontifical Oriental Institute in this file photo. The 12-year process of updating the Code of Canon Law section dealing with crimes and penalties was necessary "to make it more organic and responsive to new situations and problems," Pope Francis said Feb. 21, 2020. (CNS photo/Paul Haring)

VATICAN CITY (CNS) -- The 12-year process of updating the Code of Canon Law section dealing with crimes and penalties was necessary "to make it more organic and responsive to new situations and problems," Pope Francis said.

Meeting Feb. 21 with members and staff of the Pontifical Council for Legislative Texts, Pope Francis said the work of revising Book VI of the Code of Canon Law, "Sanctions in the Church," also was needed "to offer suitable instruments for facilitating its application."

In a 2013 interview with Catholic News Service, Bishop Juan Ignacio Arrieta, secretary of the council, said the current code was drafted in "a period that was a bit naive" in regard to the need for a detailed description of offenses, procedures for investigating them and penalties to impose on the guilty.

It reflected a feeling that "we are all good," he had said, and that "penalties should be applied rarely."

The naivete of the law became clear with the sexual abuse crisis, Bishop Arrieta told CNS. In addition, the sanctions section of the 1983 code was written with such an emphasis on the role of the individual bishop in his local diocese that each bishop bore the full weight of deciding when and how to intervene and what sort of sanction or punishment to impose on the guilty.

The law ended up being too vague, and church sanctions were being applied so haphazardly, that the church appeared to be divided, he said.

In his speech to council members, Pope Francis said the council's work on revising the section had reached a conclusion, but he did not indicate when he would promulgate the revised section of canon law.

He told members and staff that part of their task is to promote a deeper understanding of the "true meaning of law in the church, the mystical body of Christ, where the word of God and the sacraments have preeminence, while juridical norms have a necessary, but subordinate role in the service of communion."

In line with that, the pope said, it would be good for the pontifical council to help Catholics reflect on how "a genuine juridical formation in the church" highlights the pastoral importance and impact of the law and its aim of promoting the salvation of souls by affirming the virtue of justice.

"Avoiding arbitrary solutions, the law becomes a valid bulwark in defense of the least and the poor, a protective shield for those who risk falling victim to the powerful," the pope said. "Today in the context of a 'world war being fought in pieces,'" one can see how a lack of law and a lack of rights go together.

"Dictatorships are born and grow without laws," he said. "This cannot be allowed to happen in the church."