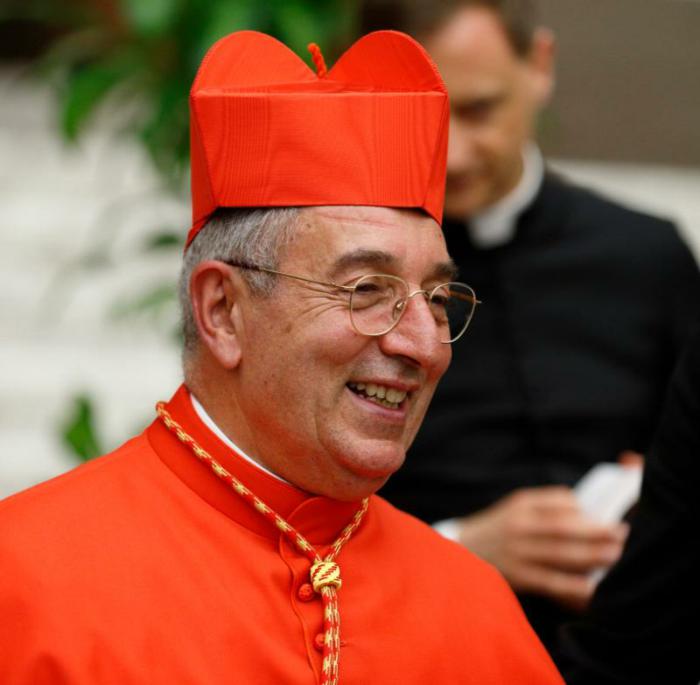 Cardinal Angelo De Donatis, papal vicar of Rome, smiles during a reception after a consistory at the Vatican in this 2018 file photo. Cardinal De Donatis was hospitalized March 30, 2020, after testing positive for the COVID-19 virus, the diocese announced. (CNS photo/Paul Haring)

ROME (CNS) -- Cardinal Angelo De Donatis, the papal vicar for Rome, was hospitalized after testing positive for the COVID-19 virus, the Diocese of Rome announced.
"After showing some symptoms" March 30, the 66-year-old cardinal was tested, the diocese said; when the test came back positive, he was hospitalized at the church-owned Gemelli hospital.
"He has a fever, but his general condition is good, and he has begun anti-viral therapy," the diocesan statement said.
Those who have been working in close contact with Cardinal De Donatis are in preventive self-isolation, it added.
According to Vatican News, the cardinal had very few meetings in recent days and "declared that he had not been at the Vatican" since the coronavirus outbreak began; instead, he has maintained "only telephone contact with the pontiff."
While the pope is the bishop of the Diocese of Rome, the papal vicar exercises most of the powers of a local bishop and presides over a vicariate with most of the usual offices found in the chancery of a large archdiocese, including a diocesan Caritas and offices for personnel, religious education and ecumenism.
"I, too, am living this trial," Cardinal De Donatis said in a statement March 30. "I trust the Lord and the support of the prayers of all of you, dear faithful of the church of Rome."
"I am living this moment as an occasion providence has given me to share the suffering of many of our brothers and sisters," he said. "I offer my prayers for you, for the entire diocesan community and for the inhabitants of the city of Rome."