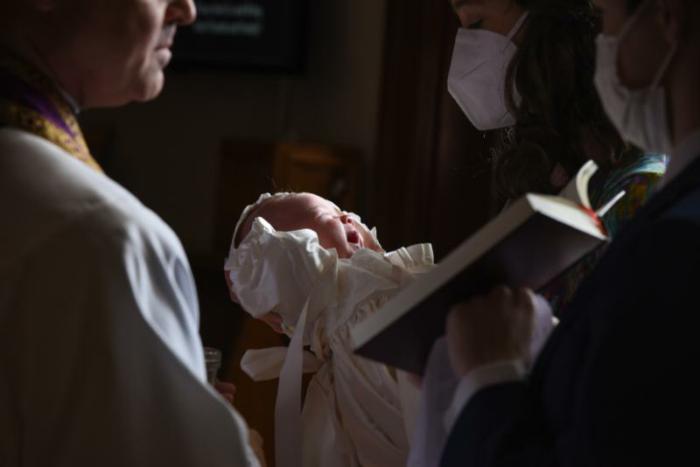 Beatrice Anne Borman is seen during her baptism at St. James Church in Falls Church, Va., April 18, 2020. Because of the coronavirus pandemic, Morgan Pino and Billy Borman were advised by their pediatrician to bring their newborn daughter from New York to Sterling, Va., and stay with Billy's parents. With most sacraments in the New York Archdiocese canceled, the couple "felt blessed" to have their baby baptized in the Arlington Diocese. (CNS photo/Zoey Maraist, Arlington Catholic Herald)

WASHINGTON (CNS) -- In a "touchless" environment spawned by the coronavirus pandemic, living out the church's sacramental life is tough without the element of touch: the reception of the Eucharist, the baptism with water, the laying on of hands, the anointing with oil.

Even so, good works have continued to flourish despite this missing dimension, remarked panelists during a May 19 forum on COVID-19 and the sacramental life of the church.

"We've stopped baptisms in Chicago. We've stopped all the weddings and funerals. All those ordinations we were going to do? All those ordinations have been stopped," said Father Richard Fragomeni, a professor at Catholic Theological Union in Chicago and a priest of the Diocese of Albany, New York, during the forum, part of the National Conference on Catechetical Leadership's online "Witness" conference.

"You see someone else reach out with love and give someone a helping hand. That's just a whole different ballgame and we're seeing that very much today in this COVID crisis," said Jesuit Father Thomas Reese, a social scientist and a columnist for Religion News Service. "The first responders and the nurses and the doctors who take care of people who are sick and put their lives at risk. Any sensible person would run.

"If that's not the power of the Spirit," he added, he doesn't know what is. "I think we should be surprised by love and not take it for granted."

Ellie Hidalgo, a pastoral associate at Mission Dolores in Los Angeles, participated in the panel from Miami, where she was grieving the sudden death of her brother when stay-at-home orders were issued in California and Florida.

While it's a disruption, said Hidalgo -- a former reporter for the Archdiocese of Los Angeles' old newspaper, The Tidings -- it has proved providential. "We've had a lot of time to deepen our prayer life, and tell stories," she said. "It has been an unexpected blessing to be so close together in this time of grief and in celebrating my brother's life."

"The question is what happens now when people are experiencing the Eucharist, visually without all the other constants, like socializing, worship as a community, socializing before and after," Father Fragomeni said.

"You can eat your breakfast while watching the priest celebrate the liturgy -- and pause it if you need to go to the bathroom. That may be our new constant."

Despite some of the inherent incongruities, "I see in this pandemic that Catholic communities -- despite the fact that they're not gathering (and) in touch with each other -- are still doing outreach to the poor neighborhoods of Chicago. That's some expression that something's still working," Father Fragomeni said. "The domestic church is coming alive in a new way, as a new constant of how liturgy is working apart from the situation. This is where I think the future and the possibilities are opening up."

Hidalgo acknowledged one distinct shortcoming during the pandemic.

"We've heard reports of how domestic violence is increasing during this pandemic. Families need a lot of our support. That boundary between a mother finding that reservoir of patience to answer a child who's asked the same question 10 times ... or that husband who has to find that place where he feels vulnerable about the family's finances," she said. "It's exhausted people who are turning to violence."

"As Catholics we're called to make our homes holy places -- not perfect," Hidalgo said. "We don't do this alone. We need God's grace to be present in family life."

She said Dolores Mission was sharing "parental success stories" on its Facebook page such as "how have you been using COVID-19 to deepen your relationship with your child or with your teenager, through playing or through conversation."

The future is fraught with possibility, not all of it good.

Diana Macalintal, co-founder and co-director of TeamRCIA.com, said that on the morning of the NCCL panel she read a Facebook post that said, "My faith is going to protect me from the virus. So I want to go to Mass, I want to be in church. I know that God will protect me."

"I know some bishops are feeling pressured to open up our churches," said Macalintal, who moderated the panel discussion, "even if it's risky, even if the gatherings start looking like ticketed events."

"We've got an obligation to protect life. That's our first priority" as a church, Father Reese said. "It's one time I'm kind of proud of the church for moving slowly. Also, they've been supportive of public authorities." He added, "Frankly, I think we should pay more attention to public health experts than politicians."

Father Reese, too, cited Scripture -- specifically, Jesus rebuking Satan when the devil exhorted him to jump off the mountain: "You shall not tempt the Lord your God." "If we're infected and we're not showing symptoms, we're going to be killing people," the priest said. "I wouldn't want that on my conscience."

Both Fathers Reese and Fragomeni said the time may have arrived for more lay-led Communion services if the number permitted to enter churches for Mass is kept at low numbers or percentages.

Macalintal said home catechesis may take its rightful place as a result of the pandemic. "We take over and become that catechist for their children" because professional catechists assume parents won't do it well, or do it at all, she said.