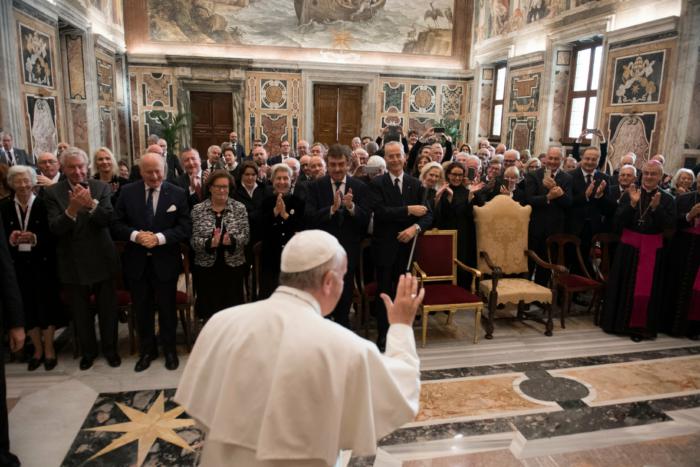 Pope Francis is pictured in a file photo at the Vatican greeting leaders of the Equestrian Order of the Holy Sepulchre of Jerusalem, a Catholic group that supports Christians in the Holy Land through prayer, pilgrimages and financial support. (CNS photo/Vatican Media).

VATICAN CITY (CNS) -- As members of the Equestrian Order of the Holy Sepulchre of Jerusalem around the world were experiencing their own COVID-19 lockdowns, they contributed some $3.5 million to a special fund to support the Latin Patriarchate of Jerusalem, especially its schools and charitable outreach.

"Despite the difficult conditions on a global level, generosity was not lacking," said a statement Sept. 17 from the order's Vatican headquarters.

About 30,000 Catholic men and women around the world are knights or dames of the Holy Sepulchre, pledging to support the church of Jerusalem with their prayers, regular pilgrimages and financial offerings.

Cardinal Fernando Filoni, grand master of the order, announced in May a special COVID-19 Humanitarian Support Fund because "the Holy Land, where the very economic lifeblood of thousands of families lies in religious pilgrimages and tourism, has been seriously affected."

As the world struggles to recover from the pandemic and its impacts, the cardinal said, "We all have a responsibility. And while international finance must decide whose side it will take -- with people or with power and one's own castle -- we choose to put people first, their work, their health, their family, their quality of life, and the future, redirecting ourselves if necessary."

"Taking care of people is part of the gift of the Christian faith, but also a duty to be fulfilled," he had said.

According to the knights, Sami El-Yousef, the CEO of the Latin Patriarchate of Jerusalem, said the assistance allowed the church "to support more than 2,400 families in more than 30 parishes with their primary needs in terms of food vouchers, products for hygiene and for their children, medicine and utility bills."

In addition, the aid helped 1,238 families in Jordan and 1,180 families in the Palestinian territories pay their children's tuitions at schools operated by the patriarchate.

Archbishop Pierbattista Pizzaballa, apostolic administrator of the patriarchate, said, "We were all amazed and impressed by the immediate response and by its scope."

Writing in the patriarchate's newsletter in May, Archbishop Pizzaballa had said the patriarchate's five schools in Israel benefited from government stimulus and aid packages, but that the schools in Jordan and Palestine -- some of which are more than 150 years old -- risked closing because many parents could not pay the tuition.

Sustaining the schools, he said, is a "sacred" duty for the church. Bringing together and educating students from every religious background and nationality, the schools form a "beautiful mosaic" where values promote "respect, coexistence, tolerance, peace and love in a region that is often marred by violence and wars."