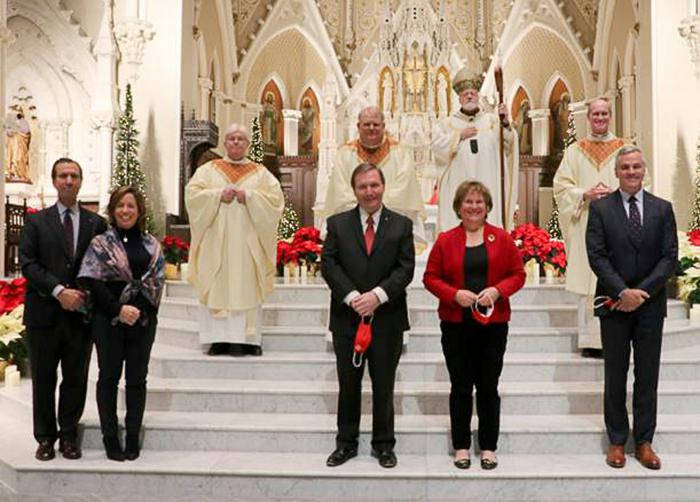 On Sunday, Jan. 3, Cardinal O'Malley celebrated a live-streamed Mass for the Epiphany with the Boston-area Order of Malta at the Cathedral of the Holy Cross. Pilot photo/CardinalSeansBlog.org

On Thursday was, of course, New Year's Eve, and ordinarily, I would have joined the Oblates of the Virgin Mary at St. Clement's Eucharistic Shrine for our annual Holy Hour and midnight Mass to ring in the New Year. However, this year, because of restrictions that are in place and the curfew in Boston, we decided instead to hold a live-streamed Mass at the cathedral. (We are very grateful for the help of our cathedral Music Director Richard Clark in arranging the livestream.)

Because this Mass always has a pro-life theme, I invited Marianne Luthin from our Pro-Life Office and her husband, Henry, to be with us to proclaim the readings.

Mass for the Epiphany

On Sunday, I was happy to celebrate a live-streamed Mass for the Epiphany with the Boston-area Order of Malta.

Feast of the Theophany

On Wednesday, I went to St. John the Baptist Greek Orthodox Church, which is just up the street from the cathedral, to greet Metropolitan Methodios and the Greek Orthodox community as they celebrated the feast of the Theophany. I was accompanied by Vito Nicastro from our Office of Ecumenical and Interreligious Affairs.

While there were only a small number of people physically present in the church, many more were participating via livestream.

I was invited to speak at the beginning of the Vespers service to greet the community and was very happy to have the opportunity to express our admiration and support for Metropolitan Methodios.

Our Ge'ez Rite Catholic community at the cathedral follows the same calendar as the Greek Orthodox. So, as we were returning from St. John the Evangelist Church, I stopped in as they were beginning to gather for their own celebration. I was very happy to greet them and wish them all a very Merry Christmas.

Meeting of the archdiocesan Review Board

On Thursday, we had a meeting of our archdiocesan Review Board. This is the body that advises us on individual cases of clergy sexual abuse and also makes recommendations on policies and procedures.

During our meeting, we heard a presentation by Vivian Soper, the director of our Office of Pastoral Support and Outreach, who spoke on preparations for the upcoming audit that will ensure the archdiocese is in compliance with the U.S. Conference of Catholic Bishops' child protection policies.

We have a wonderful group of people who serve with us on this board, including a rabbi, a judge, a victim-survivor of sexual abuse, a psychologist, and others with expertise in various relevant fields. We are very blessed to have this group of men and women who are well-credentialed for this task, which is not an easy one. It's a difficult area to be working in, but they do so generously and very conscientiously. We are very grateful for their service.