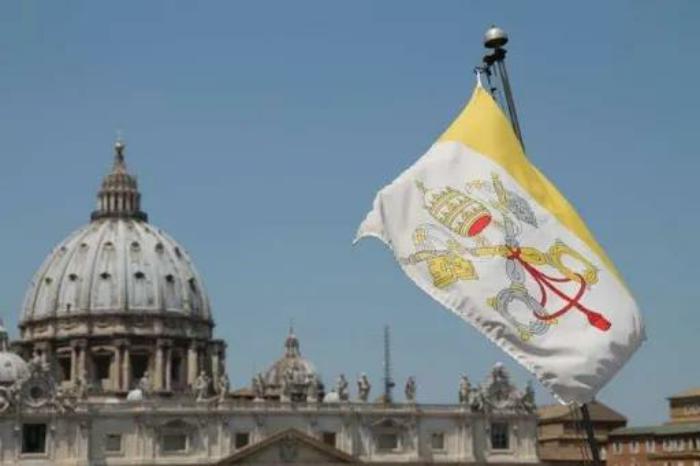 The flag of Vatican City with St. Peter's Basilica in the background. Credit: Bohumil Petrik/CNA.

The Papal Foundation announced April 28 they will be distributing $9.2 million in grants to dioceses in 64 countries in the coming year.

This year's grants will finance the construction and repair of church and school buildings, environmental initiatives and the education of children in need, among other projects. The organization cited Pope Francis' call earlier this year to rebuild church buildings in the Middle East as a guiding factor in this year's grants.

The Philadelphia-based Papal Foundation's mission is to serve the Holy Father and the Roman Catholic Church through "faith, energy, and financial resources."

"The Holy Father has identified urgencies throughout the world, and The Papal Foundation is committed to working diligently to address his priorities to house, educate, heal, and feed individuals in need," said Cardinal Sean O'Malley, chairman of The Papal Foundation Board of Trustees, in a statement provided to CNA.

"In addition to providing for these basic human needs, The Papal Foundation is helping create the physical infrastructure to allow the faithful to receive the sacraments and practice their Catholic Faith."

Among the projects that will be funded by the grants include the construction and repair of churches, chapels, libraries, laboratories and schools; the creation of a dialysis center in a Catholic hospital; the renovation of children's centers; the purchase of surgical equipment for a Catholic teaching university; the education of intellectually disabled children and orphans; the housing of retired religious; environmental initiatives; and the fight against human trafficking and sexual explotation.

Eustace Mita, president of The Papal Foundation's Board of Trustees, said that Pope Francis' visit to the Middle East and his call to rebuild Catholic buildings in the region, as well as his message of a unified Christian community, influenced the work done by the foundation.

"At The Papal Foundation, we are doing just that, funding projects and initiatives that support the Catholic Church's presence in the Middle East and mission to educate children, offer vocational support for adults, and provide for medical needs in these countries," said Mita in a statement provided to CNA.

The buildings, said Mita, are "so much more" than the "physical manifestations of our faith" in the Middle East.

"By responding to the Holy See's requests, we are doing our small part to build the bonds of community Pope Francis referenced," he said. "We are building connections between the hearts of the faithful and our Lord Jesus Christ."