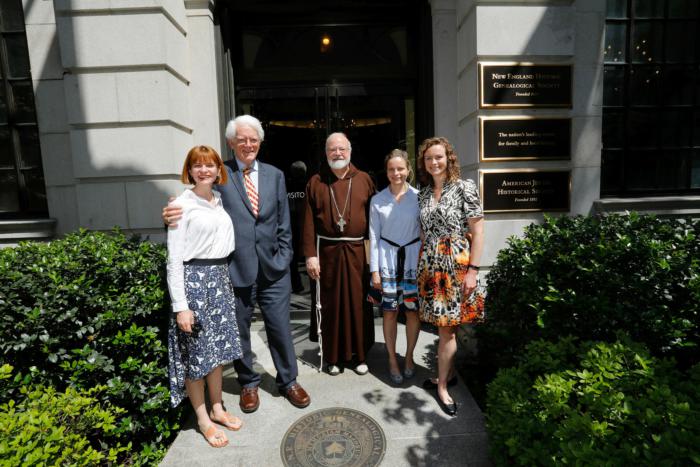 Cardinal O'Malley poses with Peter Lynch and his three daughters Mary, Annie and Elizabeth at the dedication of a new garden at the New England Historic Genealogical Society in honor of Carolyn Lynch on June 8. Pilot photo/CardinalSeansBlog.org

On Thursday (6/7), I had a chance to meet with my good friend, Francis Suarez, the Mayor of Miami, who was in town for the annual meeting of the U.S. Conference of Mayors, which was held in Boston last weekend.

Francis came to visit me at the cathedral along with his police chief and his Sergeants at Arms who were with him for the conference.

Progress at the cathedral

Later that day, I had a chance to see the progress of the ongoing work at the cathedral. We looked at different colors and they showed us how the Stations of the Cross are being restored. It was just very impressive to see all that is being done.

Friday (6/8), I went to the dedication of a new garden at the New England Historic Genealogical Society in honor of Carolyn Lynch, who was very involved in the society and was a member of their Board of Directors.

The garden is right in front of the society's Newbury Street building.

With us for the dedication were, of course, Peter Lynch and his three daughters Mary, Annie and Elizabeth, along with members of the Catholic Schools Foundation and the Board of Directors of the Genealogical Society.

I was very happy to be at the event to honor the memory of Carolyn Lynch. We are also very pleased the society has partnered with the archdiocese to digitize our historic sacramental records going back to the very beginning of Archdiocese of Boston.

Also that day I met with Michael MacLean, the president of Thomas Aquinas College in California.

They have received some property in Northfield, in Western Massachusetts, and are planning to establish a satellite campus here.

On Saturday (6/9), I departed for Rome for the meeting of the C9 Council of Cardinals advising the Holy Father on the reform of the Roman Curia.

We had our regular meetings with the Holy Father and we received reports from Msgr. Brian Ferme on the Secretariat for the Economy.

One of our major actions during this gathering was to present the Holy Father with a first draft of the document Predicate Evangelium, which is to replace Pastor Bonus, the document describing the structure of the Roman Curia.

As I always do whenever I am in Rome, I visited with the staff of the Pontifical Commission for the Protection of Minors and we had a Mass together.

One night we went to the Piazza Navona for a dinner with a number of Boston priests and seminarians who were in Rome.

We were also joined by Sister Jeanne Gribaudo of Merrimack College who was on a Jubilee trip to Rome as well as Mr. Bob Morrissey, who was in Rome in his capacity as financial advisor to the Jesuit Order. It was wonderful to be able to see them in Rome!